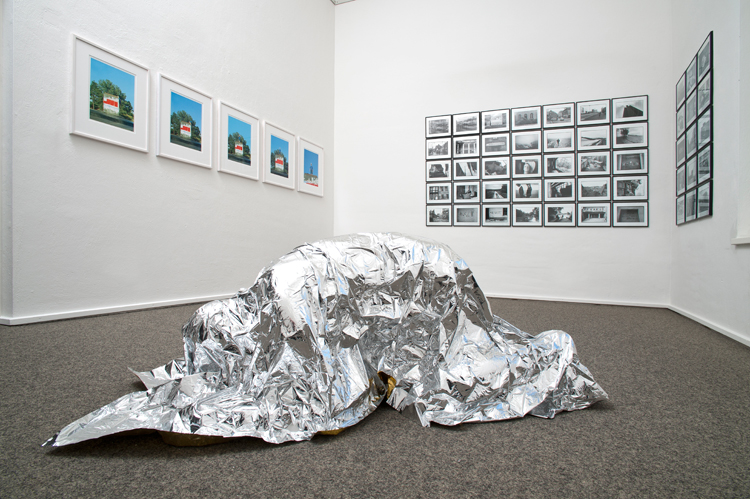 Works by Kamen STOYANOV, Michael RUTSCHKY and Pamela ROSENKRANZ.
VIERSEN | Städtische Galerie im Park | February 26 – April 29, 2012
INSIGHT - OUTSIGHT II
“Insight - Outsight II” focuses on works of art that relate to urban space and its architecture in the broadest sense. It is the second exhibition of the private collection Peters-Messer at the city's Gallery.

“Insight - Outsight II”: With this title the private art collection fpm collection from Viersen is celebrating its second exhibition in the city's gallery. As already two years ago, the focus is on installation this time too - and thus creates a link to the sculpture collection in the garden of the exhibition house.

The exhibition focuses on works of art that relate to urban space and its architecture in the broadest sense. The buildings of the modern age and the urban structures are based on a utopian potential, which is why artists often use them to point out social grievances, civilizational phenomena and historical changes. Often, however, they also form a purely formal frame of reference or even a spiritual orientation aid.

The reference to architecture stands out most clearly with Sabine HORNIG (born 1964 in Pforzheim). Your shop facade (“Storefront”, 2002) made of prefabricated materials such as rough plaster, glass and plywood not only serves to visualize modernist principles of form, which were originally linked to an idea of ​​a better life, but on the contrary acts like the surrogate of oppressive petty bourgeoisie. Her photographs of East Berlin also speak a negative language: private and public space, inside and outside views, windows and doors become interchangeable. Only individual fingerprints on panes or reflections from trees indicate individual traces of life. 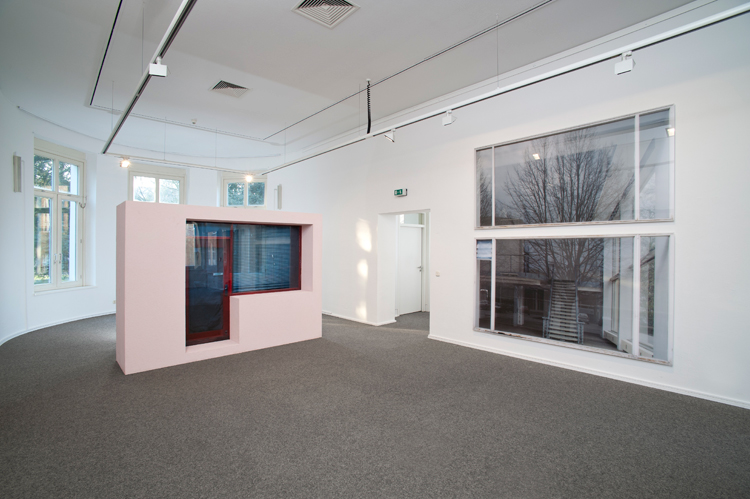 For the Turner Prize winner Keith TYSON (born 1969 in Ulverston, GB), on the other hand, the wall serves as a mental source of reference. His “Studio Wall Drawings” each consist of a piece of paper measuring 157 x 126 cm - corresponding to the dimensions of a small wall in Tyson's studio. The sheets are attempts to inscribe an order into reality with the help of sketches and schemes and thus to fathom the connections between our existence. At the same time, they functioned as diary-like sketches that reflect his ideas, emotional situation and moods, but also visits by guests in the studio, global political events and economic fluctuations. 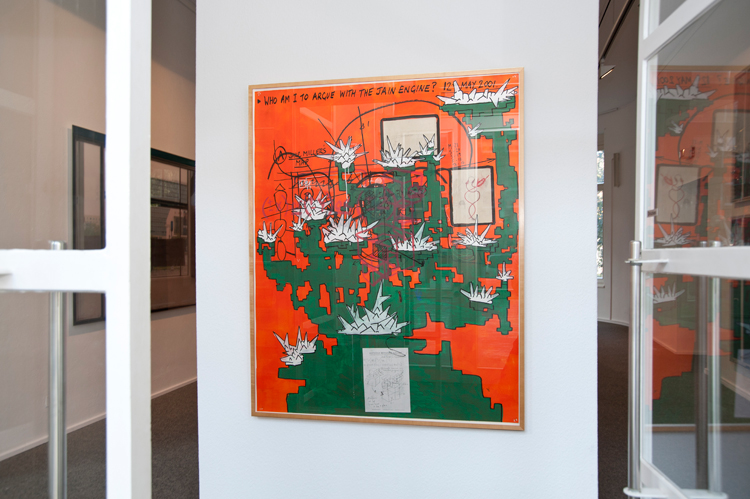 Keith TYSON "Studio Wall Drawing: May 12th 2001 Who am I to argue…", 2001
The installations by Thomas HIRSCHHORN (born 1957 in Bern), who played in the Swiss pavilion at the Venice Biennale in 2011, are similarly absurd, albeit far more expansive. With cardboard, aluminum foil, adhesive tape, neon tubes and newspaper clippings, he approaches media and political reality in a dadaesque do-it-yourself aesthetic. Made provisionally from plywood, the museum mutates from a temple of the muses to a morbid showcase (“Art Center 3 (Blow Down)”, 2001), cut-out porn pictures and countless eyes form a grotesque connection in a single collage (“The Price of Suspicion ”, 2009), which holds up a mirror to the voyeurism of the media society. That he was originally a graphic artist is shown above all in Hirschhorn's early works, which still appear strictly abstract, even if they have already been “tinkered”: reliefs made of cardboard and aluminum with photocopies of famous personalities (“oT (4 gallery owners)”, 1989) look like small ones Finds transformed into icons - just like the collages dedicated to Robert Walser and Ingeborg Bachmann: They stand for Hirschhorn's belief in material simplicity and spiritual and moral instances that are diametrically opposed to the fragility of postmodern society. This thought is also reflected in "Untitled (Stalagtites-red-table)" from 1997: What looks like a semi-futuristic structure between stalactite cave and gazebo is in the tradition of classical modernism with its belief in the improvement of the world: Kurt Schwitters' nested Merzbau and Vladimir Tatlin's model tower are the inspiration. 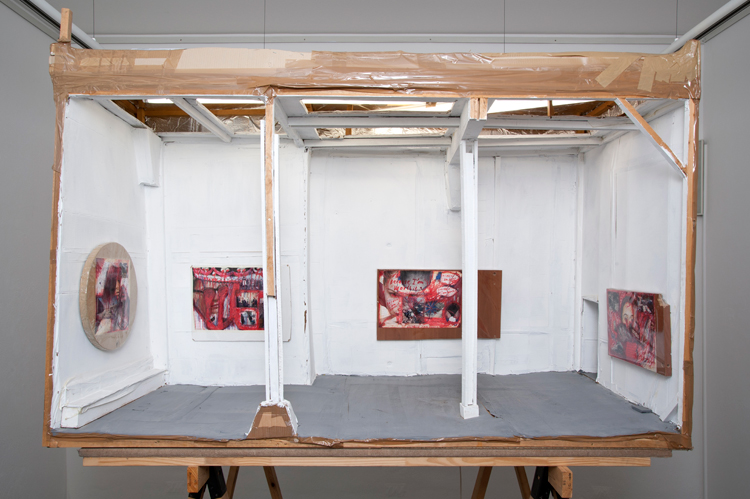 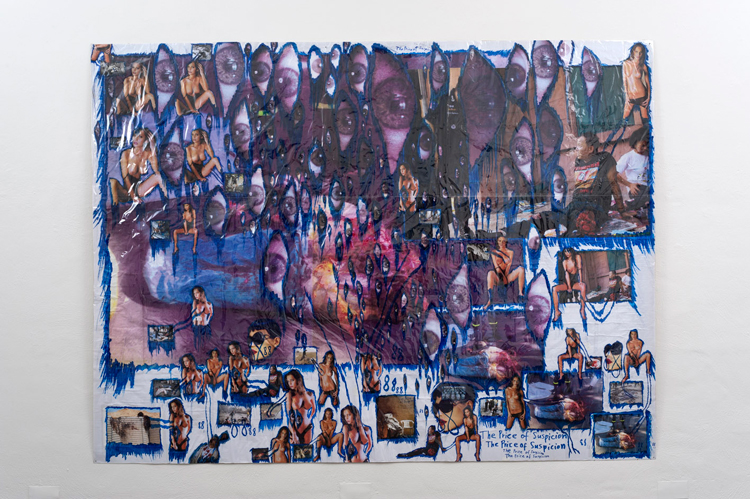 Thomas HIRSCHHORN "The price of suspicion", 2009 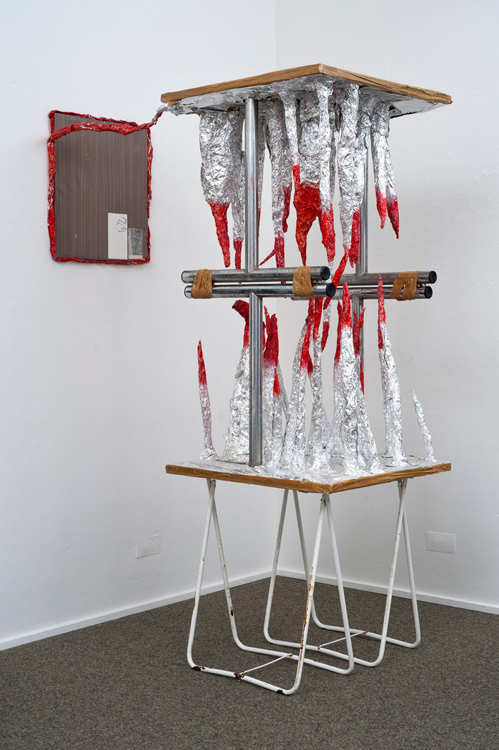 Gereon KREBBER is also about simple materials. The Cologne sculptor (born 1973 in Oberhausen) has already wrapped balloons with cling film to create a feather-light colossus, or placed a gelatin block on the landing that looked like plastic, but closed with every step began to tremble. The prickly snake that now winds its way through the city's gallery is made up of trouser hangers and cable ties. Krebber's tactic is a simple but clever puzzle game with which he nonchalantly conquered space: soft things seem hard, light things difficult - DIY store banalities become abstract beings that come into conversation with the architecture. 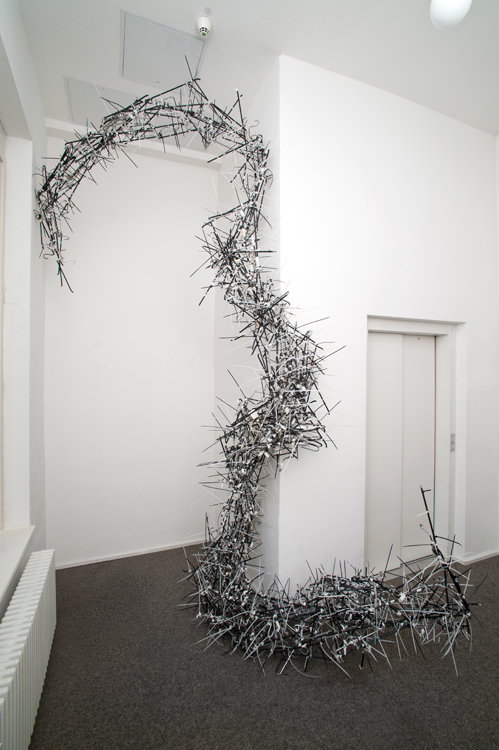 David HOMINALS Kiste (born 1976 in Evian) is similarly contradictory in the room. The Swiss inscribe a new meaning into discarded everyday things such as yoghurt cups or light bulbs by processing them with color and combining them into assemblages. He painted an old cardboard box white so that it looks like a tinkered variant of classic, clean Minimal Art and could just as easily be lying on the roadside, and scrawled “I don't give a shit” on it - an ironic gesture his predecessors made pushes off the pedestal of art history and at the same time draws a bow in the direction of surrealism: what is in the box remains a mystery. 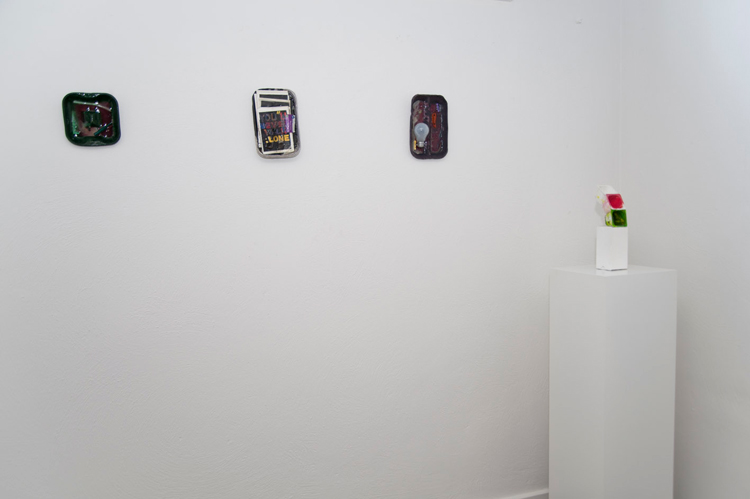 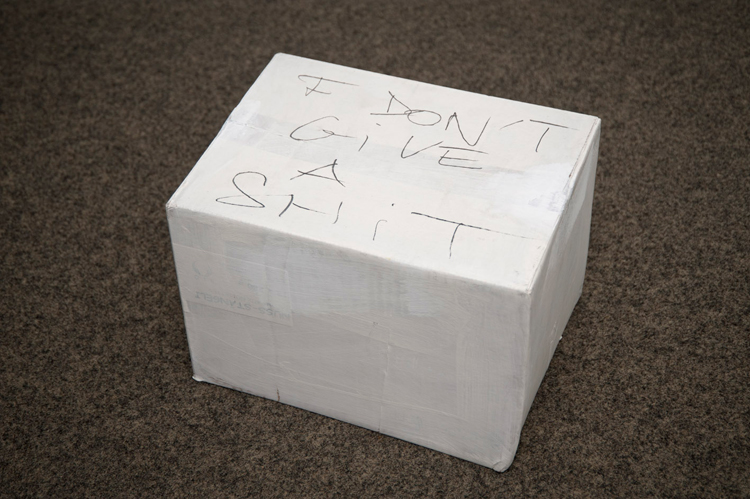 What Erik VAN LIESHOUTS (born 1968 in Deurne, Netherlands) holds in the plywood box cannot be overheard. In his crude drawings and elaborate video installations, the artist loudly asks questions about identity, focuses on marginalized groups and directly addresses uncomfortable topics such as exclusion or migration conflicts. Here humor and self-irony play a central role that can lead to unnerving embarrassment. The video "Rotterdam - Rostock" (2006) was shown for the first time at the 4th Berlin Biennale. Installed in a construction container at the time, it shows the artist himself traveling across northern Germany by bicycle. In the style of a documentary, van Lieshout shows how older citizens openly express their sympathy for National Socialism. Such passages alternate with slapstick-like scenes in which the artist desperately laments the breakup of his girlfriend, who broke up with him at the beginning. In this way, on the one hand, he explores the symbols and identities of certain marginalized groups, on the other hand, he uncovered parallels between personal and political extreme situations. 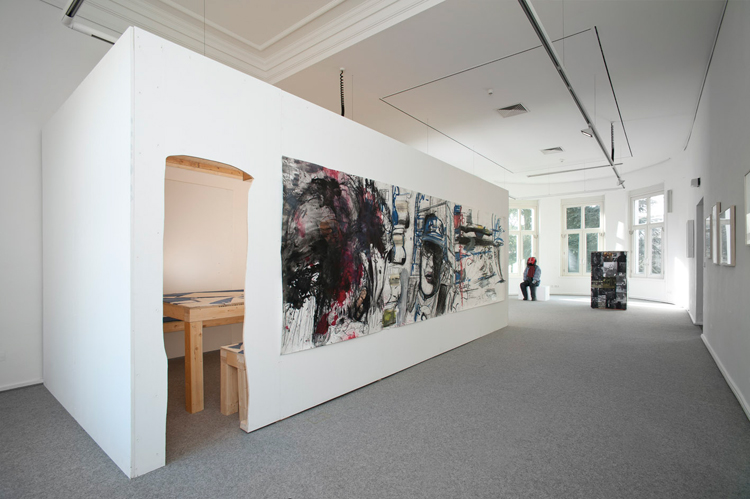 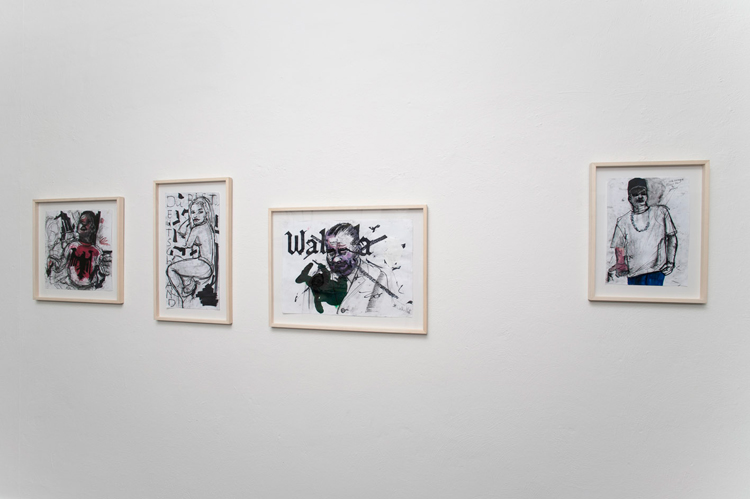 Iris KETTNER (born 1968 in Mainz) is also concerned with marginalized groups. At the sight of their figures one involuntarily winces: Poor figures, wrapped in thick layers of old clothes, squat on benches, lean against the wall or on the front man, as if they were standing in a queue in front of a homeless table ("Reihe", 2006): Kettner's figures are allegories of anonymity and destructive power of modern cities. They have no personal characteristics but are outsider prototypes of mass society. That the homeless are practically outlawed is clear from the reactions that Kettner's dolls evoke. For example, the “Superheroes” (2005/2008) with their fantasy masks were installed on benches on the subway platforms at Alexanderplatz in Berlin for a month. Kettner documented the attacks through photo and film recordings: The covered faces and the poor clothes, the permanent, immobile presence evoked interested contact on the one hand, and violence on the other. Objects that passers-by left - flyers, coins, sweets, bottles - were collected and are now part of the documentation of the work. In the end, some of the dolls were completely destroyed, only two of them could be restored. 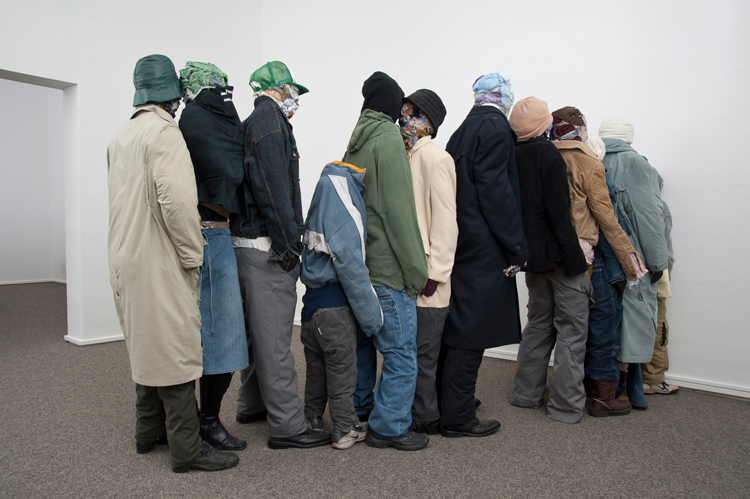 Everyday civil life is also the subject of Florian SLOTAWA (born 1972 in Rosenheim): His installations consist of all kinds of household items, from dishwashers to radios. Through strange combinations and re-arrangements, Slotawa asks about identity and property, function and uselessness, home and nomadism - and at the same time shifts the focus on the formal vocabulary of modernity: Originally of purely functional value, his "dishwasher" unfolds in the inclined connection with window frames a surreal force with which Slotawa turns the modernist principle “form follows function” into the absurd. 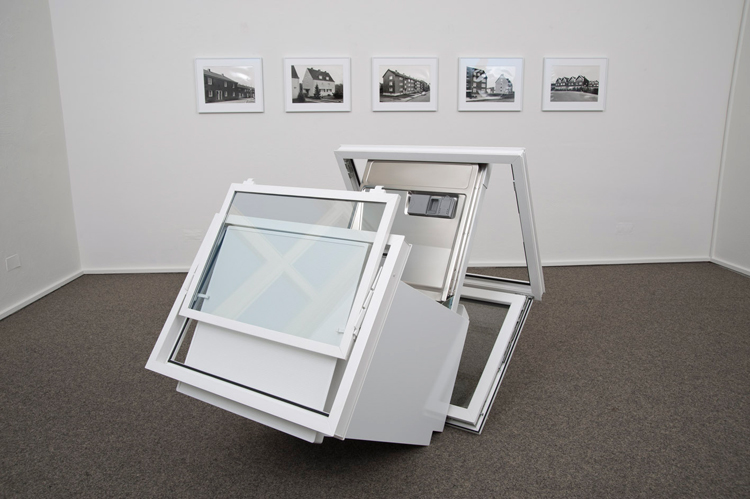 In contrast, the Düsseldorf photographer and Becher student Thomas STRUTH (born 1954 in Geldern) focuses on the dreariness of the BRD mediocrity. In his series of standardized Leverkusen residential buildings, he translates deserted urban fringe phenomena into images of reduced, serial aesthetics - which function like merciless social studies. Struth shows what nobody sees in everyday life: the apartment buildings become symbols of functional and social contexts and bring a narrow-minded spirit to the point. 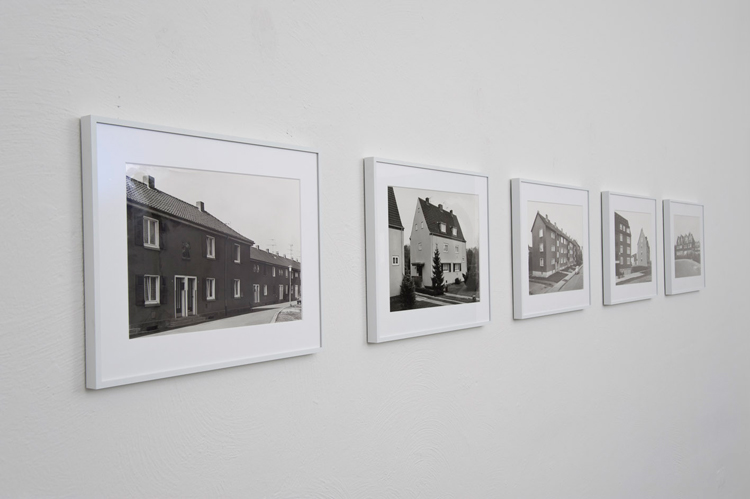 Thomas STRUTH, from the series "Leverkusen", 1980

Larissa FASSLER (born 1975 in Vancouver) also examines everyday life in modern cities. With the help of maps she designed herself, she shows the psychogeographic structures of “non-places” - underpasses, pedestrian zones or residential complexes such as the Kottbusser Tor in Berlin-Kreuzberg: the building system of run-down high-rise buildings from the 1970s is synonymous with the social hotspot par excellence. What was once planned as a meeting place with excellent transport links, today stands for the disintegration of the urban community into an anonymous, transitory coexistence where drugs and arms trafficking are the order of the day. Fassler counteracts this by adding personal impressions to her cards: own steps, a police operation, beer prices and punk get-togethers turn the cold plans into little stories.

Pamela ROSENKRANZ (born 1979 in Sils-Maria, CH) “Bow Human” could be taken from this environment. The sculpture shows that the artist has dedicated herself to emptiness and absence as a phenomenon of our time: the silver shimmering rescue blanket arches as if a body were still lying underneath. One could almost think of the body prints of the dead in Pompeii, if the synthetic shimmer did not have something futuristic - and at the same time absolutely contemporary: From the tent camps of the "Occupy Wall Street" movement to accident victims or homeless people, such ceilings have long been part of public space, even if the crouching posture indicated here radiates the greatest intimacy.

Michael RUTSCHKY (born 1943 in Berlin) roams the city as a flaneur. The essayist and author is always on the move with the camera. His recordings document the environment through socially critical glasses - the snapshots of the new federal states represent a mood of uncertainty immediately after reunification.

Kamen STOYANOV (born 1977 in Rousse, Bulgaria) takes an ironic look at the relics of communism with his series of photos: “Hello Lenin” (2003) shows the artist climbing a flaky pedestal on which a statue of Lenin once stood . To see the artist himself there in casual clothing gives a picture that is typical for Stoyanov: major political issues, manifested in monuments, he puts in a personal light with banal gestures - and pulls the sting out of them. 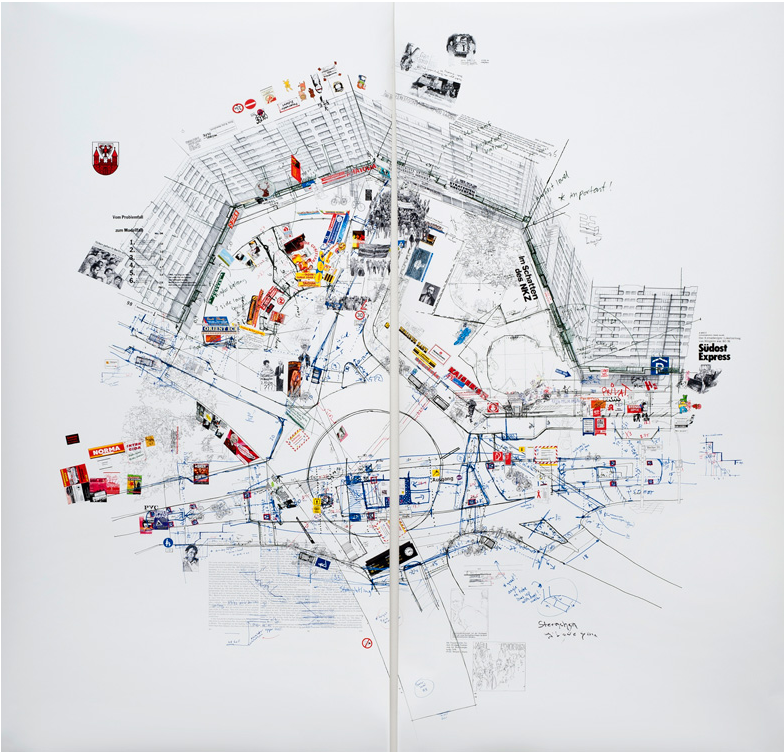 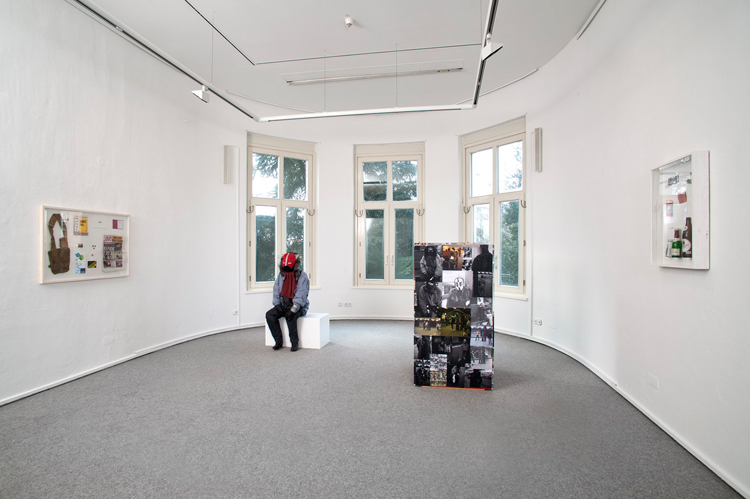