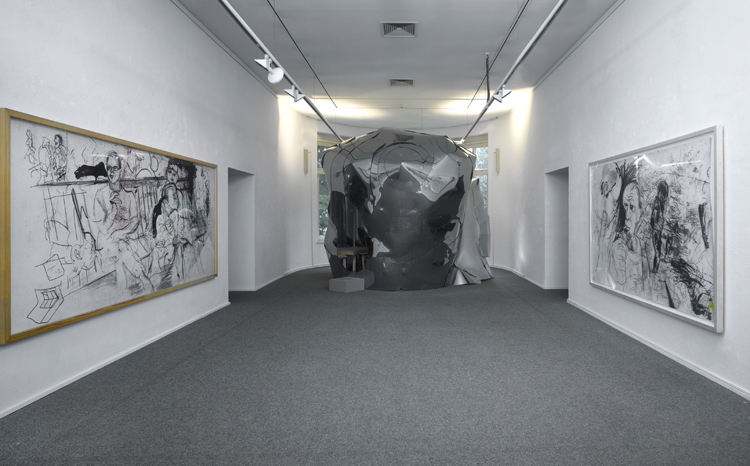 Works by Erik VAN LIESHOUT
VIERSEN | Städtische Galerie im Park | February 7 – March 21, 2010
INSIGHT - OUTSIGHT
The focus of "Insight - Outsight" is on the contradiction between inside and outside, the view in or out - on a formal as well as a metaphysical level. With the exhibition, the Städtische Galerie im Park Viersen is presenting large parts of the Florian Peters-Messer collection for the first time.

With the exhibition “Insight - Outsight”, the Städtische Galerie im Park Viersen is presenting large parts of the Florian Peters-Messer collection for the first time. From February 7 to March 21, 2010 around forty works by Martin ASSIG, Stephan BALKENHOL, John BOCK, Alicja KWADE, Erik VAN LIESHOUT, Manfred PERNICE, Raymond PETTIBON, Felix SCHRAMM, Hiroshi SUGITO and Kon TRUBKOVICH will be brought into dialogue with each other. The main focus is on the contradiction between inside and outside, the view in or out - on a formal as well as a metaphysical level. 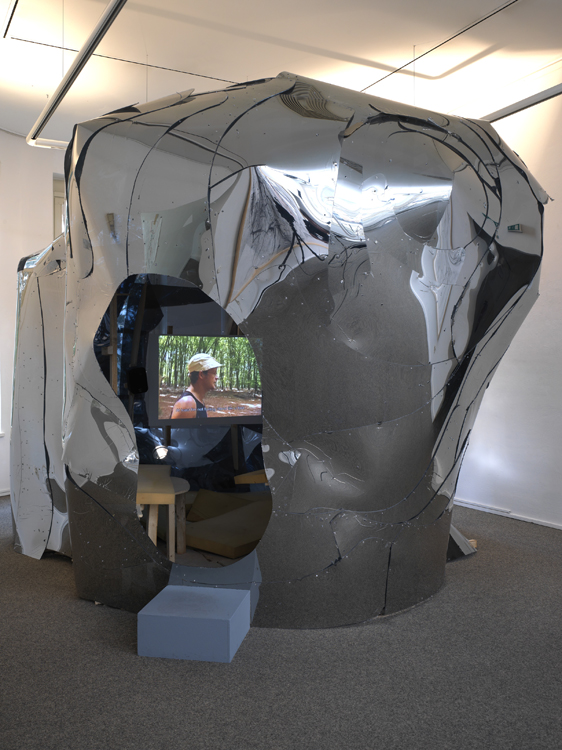 On the ground floor of the classicist building of the Städtische Galerie, brutal-grotesque meets political-conceptual works. The central room shows the installation “Happiness” by the Dutch artist Erik VAN LIESHOUT. A video is running in an igloo-like plywood building in which the artist and his brother argue about the subject of homosexuality in a mental hospital - the question soon arises as to where the boundaries to “being crazy” actually lie. Large-format drawings by VAN LIESHOUT also hang on the walls. The “Ugly Luise” by the Berlin sculptor Manfred PERNICE is placed in the rotunda - two red metal rods in concrete: a formally simple and psychological find from a demolished playground near the Berlin Wall. 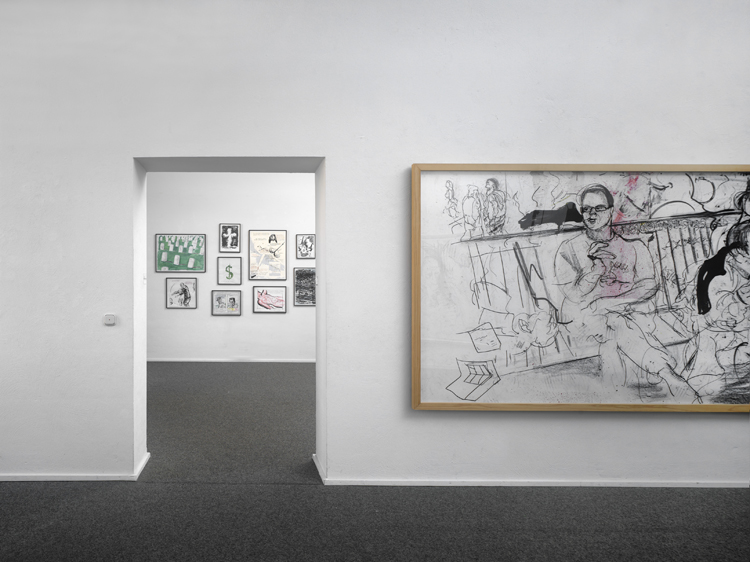 In the front left side wing, installations and wall pieces by the Russian Kon TRUBKOVICH, who lives in New York, are on view, whose work is about work and freedom - topics that dominate the failed communist as well as the capitalist system. In the same room, the large wall is decorated with drawings by the Californian Raymond PETTIBON, who thematizes the virile myths of America from Batman to Bill Gates in cartoon style. A dadaesque assemblage by the Berlin artist John BOCK is presented on the floor in the left rear wing, reminiscent of an experiment in a laboratory or children's room. 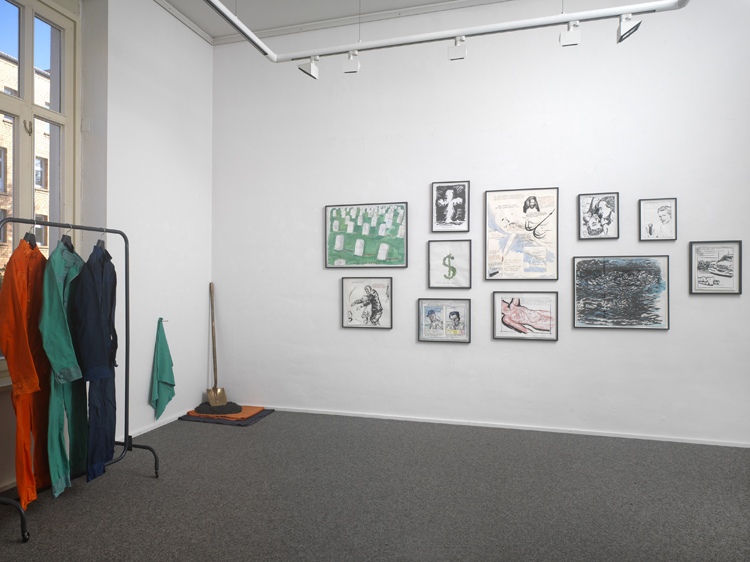 Intallation view with works by Kon TRUBKOVICH and Raymond PETTIBON. 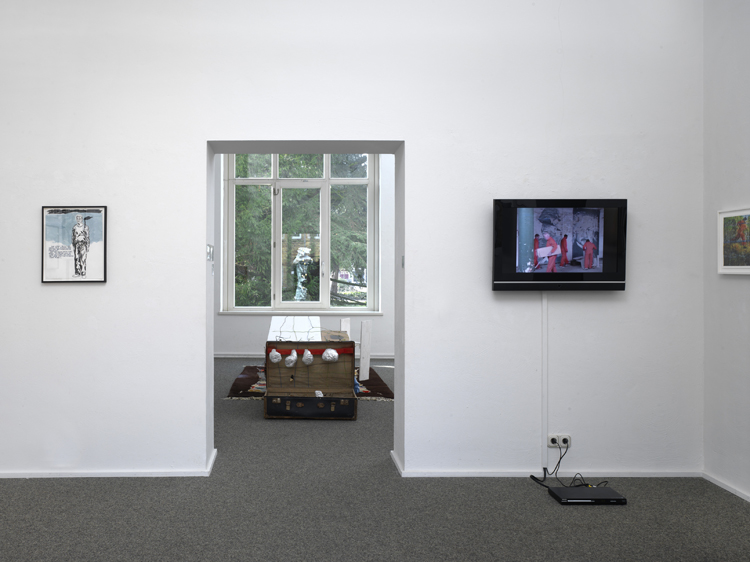 Large-format, multiple-exposure photographs of light sources and a mirrored wall clock by Berlin artist Alicja KWADE hang in the stairwell - with the themes of light and shadow, time and mirror, she draws on classic vanitas motifs, which she implements in a minimalist aesthetic. 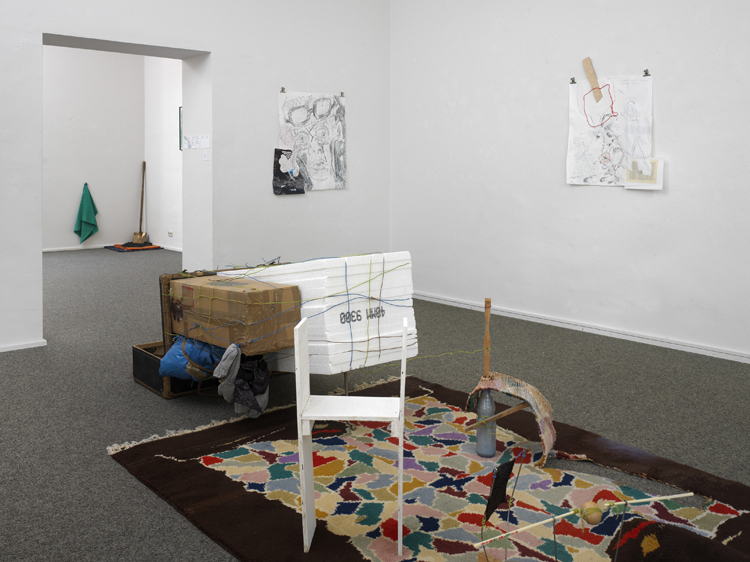 On the upper floor, painterly and sculptural works predominate, which also play with art-historical traditions. The central room is dominated by the architectural deconstructions by the Düsseldorf sculptor Felix SCHRAMM. What at first seems like a brutal wall breakthrough or plywood rubbish are actually carefully draped compositions that convey a subtle elegance despite their vehemence. The left front wing is dedicated to the painter and sculptor Martin ASSIG, whose brightly shimmering encaustic pictures, drawings and sculptures convey an organic aesthetic - the body, its protection and its vulnerability is a central aspect in Assig's work. In the adjoining room behind, the enigmatic paintings by the Japanese Hiroshi SUGITO convey a lyrical, seemingly surreal lightness. The roughly hewn, figurative wooden sculptures by the sculptor Stephan BALKENHOL in the same room form an extreme counterweight to this. 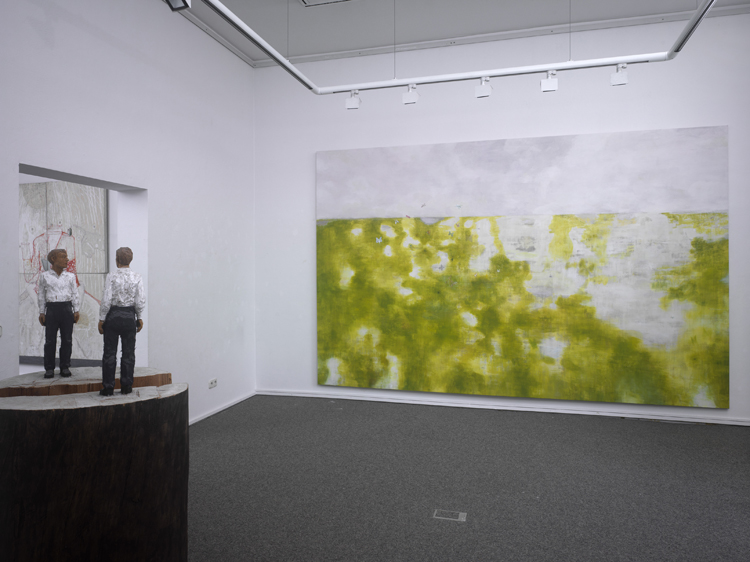 Hiroshi SUGITO "The Web", 2005 and sculptures by Stephan BALKENHOHL 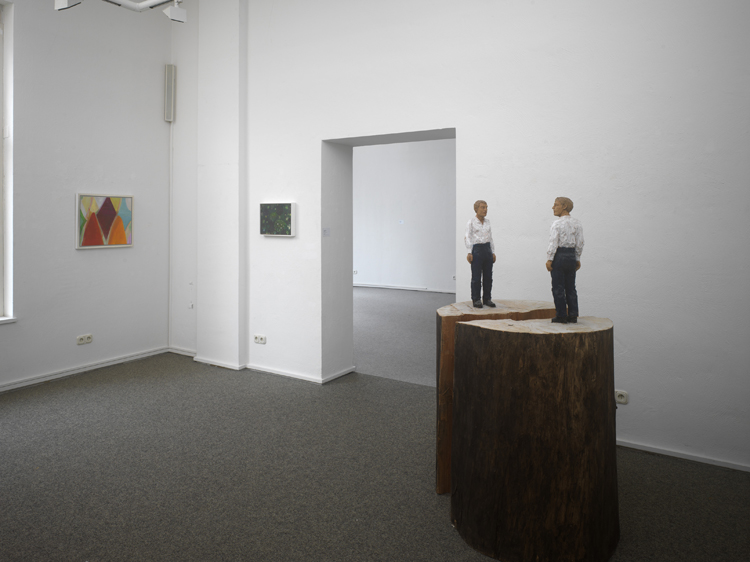 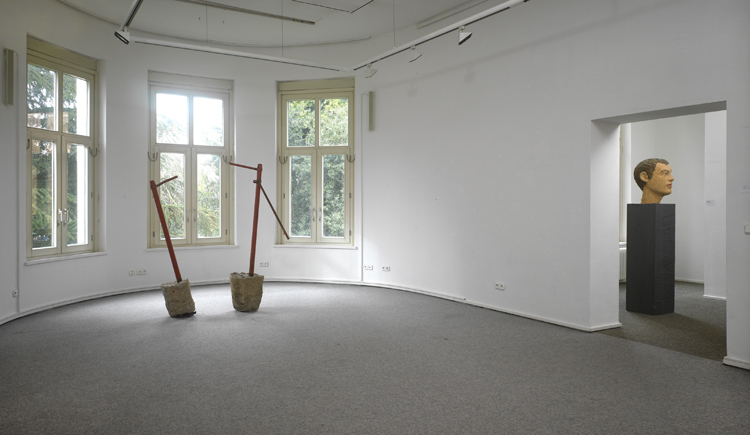 The Florian Peters-Messer Collection currently brings together around 300 works by almost 30 artists, which the collector, who lives in Berlin and Viersen, has brought together over the past 15 years. 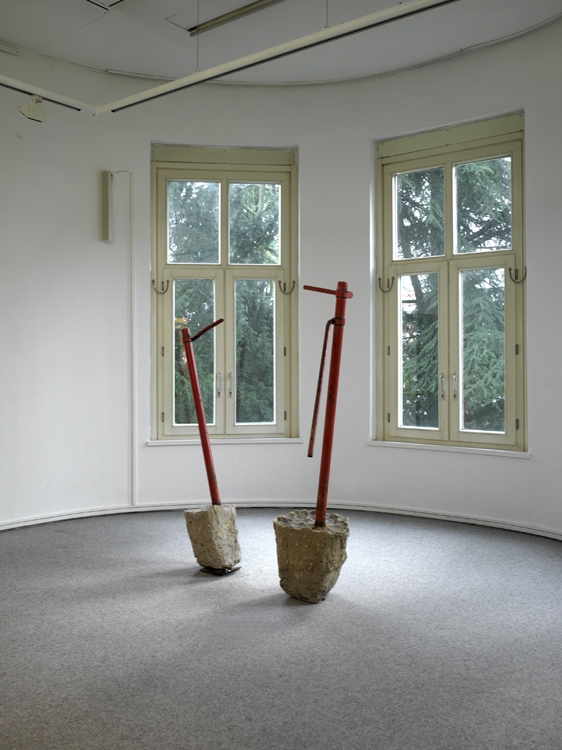 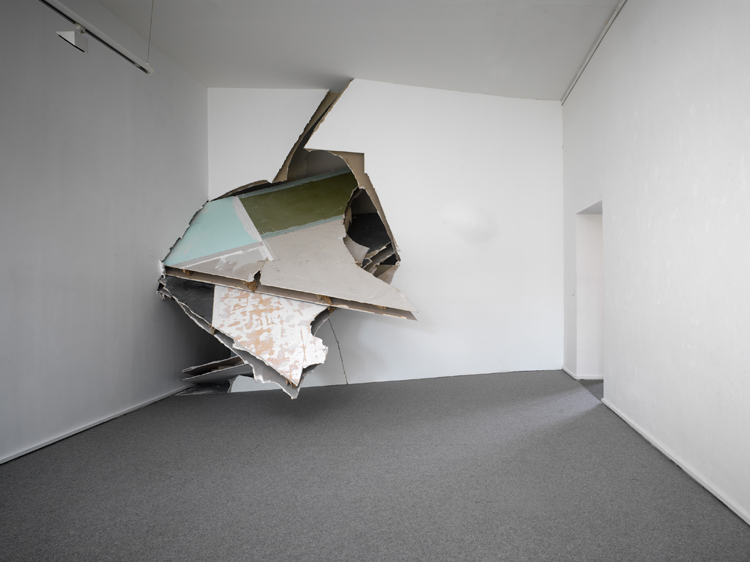 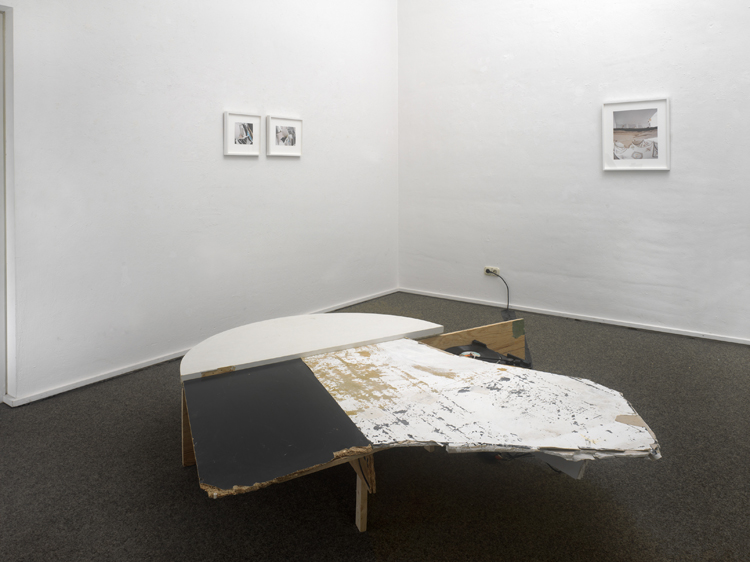 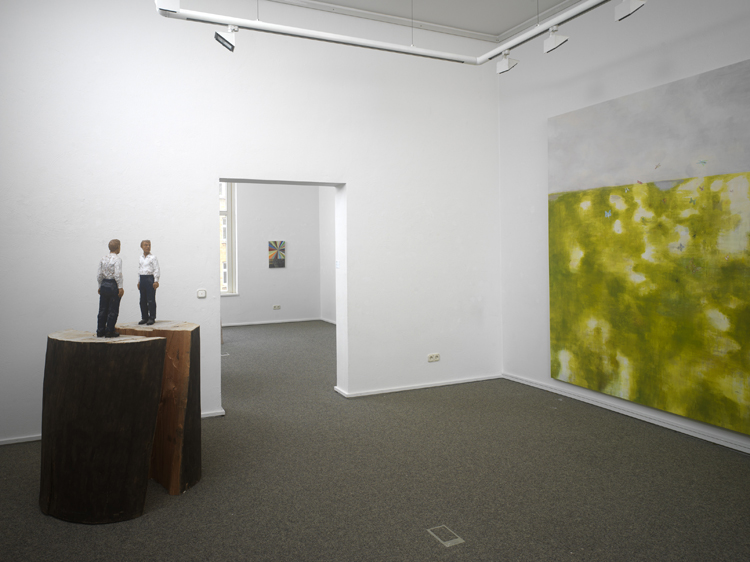 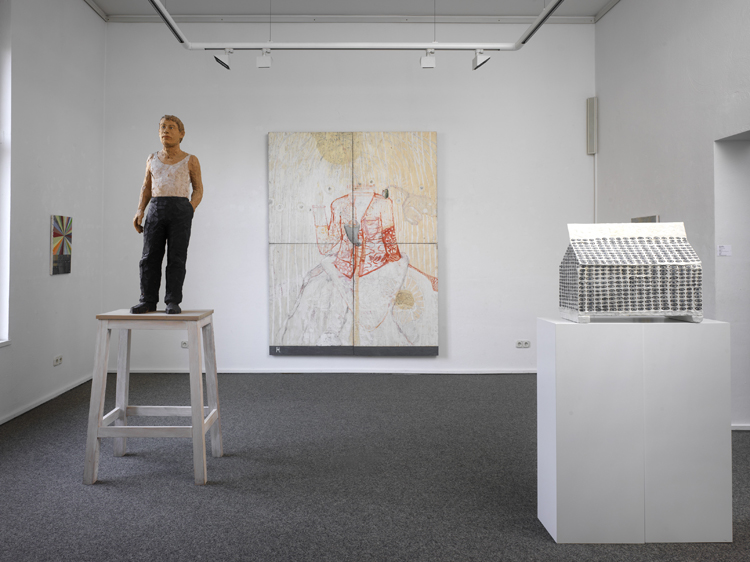 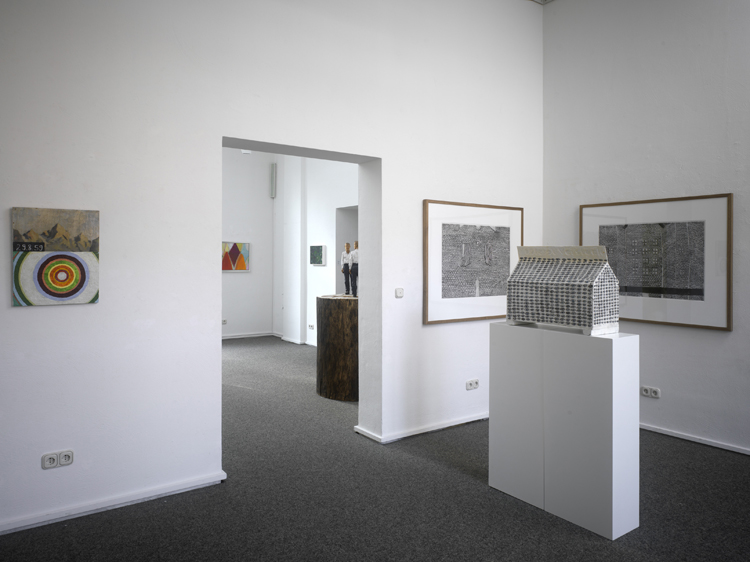 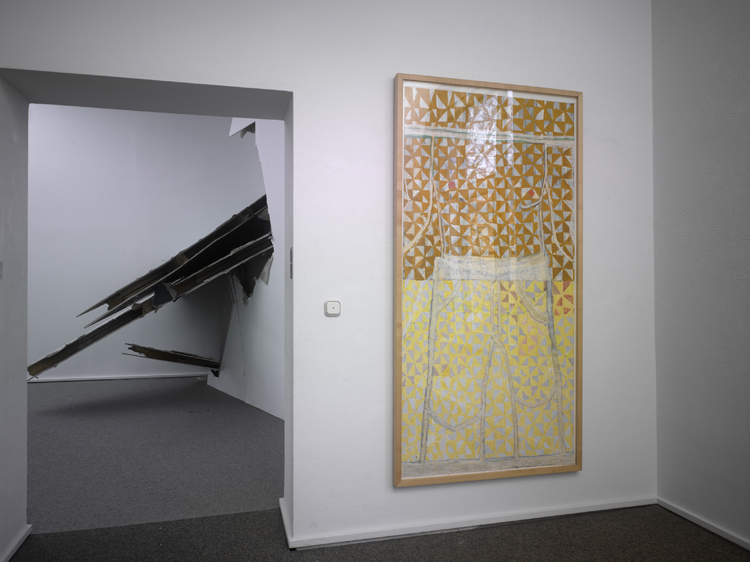 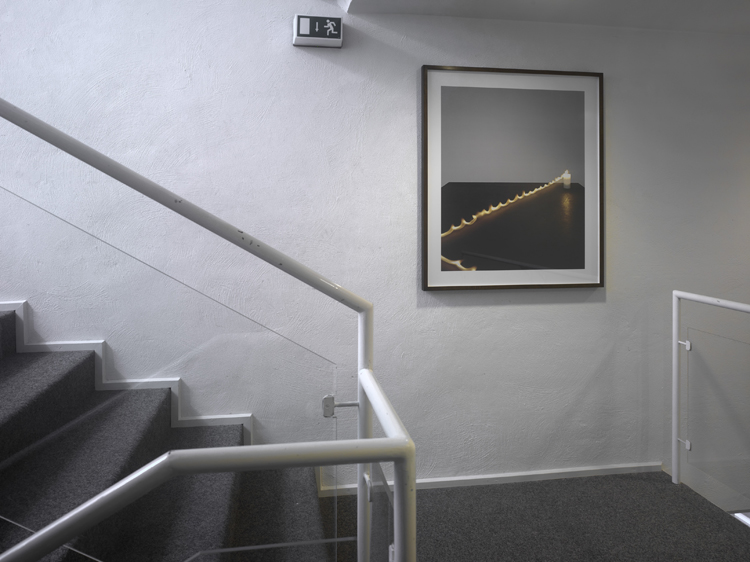