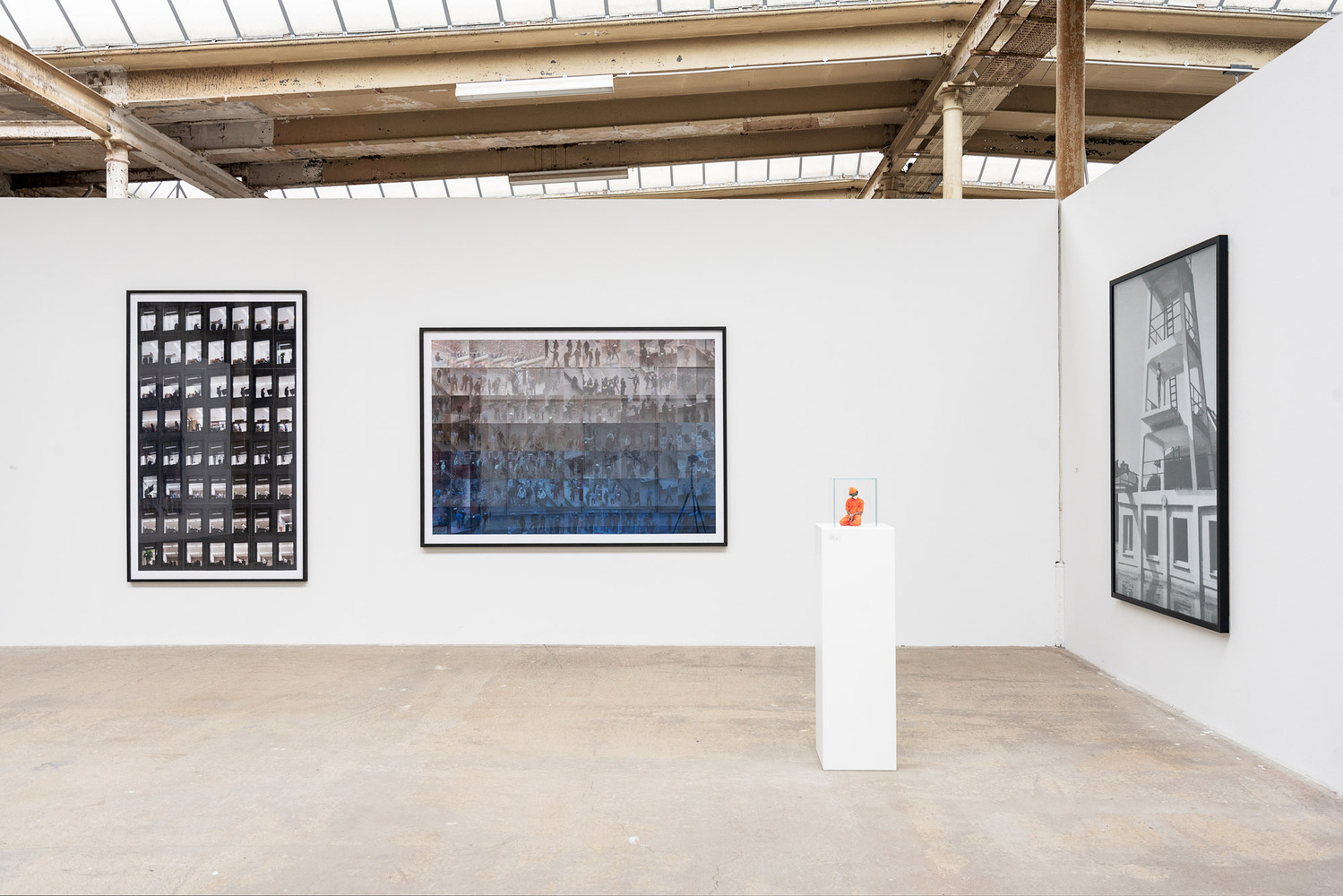 Installation view, Halle 14, Baumwollspinnerei Leipzig. Photos: Falk Messerschmidt.
LEIPZIG | Baumwollspinnerei | 6 April – 4 May 2019
YOU ARE HERE
The exhibition shows around 40 positions from the collection Peters-Messer. They are being presented to the public for the first time on such a large scale in the factory exhibition hall of the Leipzig cotton spinning mill.


"Earth is heaven. Or hell. Your choice." With this quote from US psychologist Wayne Dyer in his work Heroes of Labor (2018), the artist Sven JOHNE makes one thing clear – everything is a matter of attitude.

The exhibition "You are here" takes this insight as its starting point, looking at it from an artistic perspective. Artists are presented who examine the political, societal and sociological circumstances of our times from different standpoints. The exhibition title, taken from a work by Stefan WISSEL, not only refers to the viewpoint of the artists being presented here, but at the same time positions the onlooker vis-à-vis the questions being raised by the art on show. 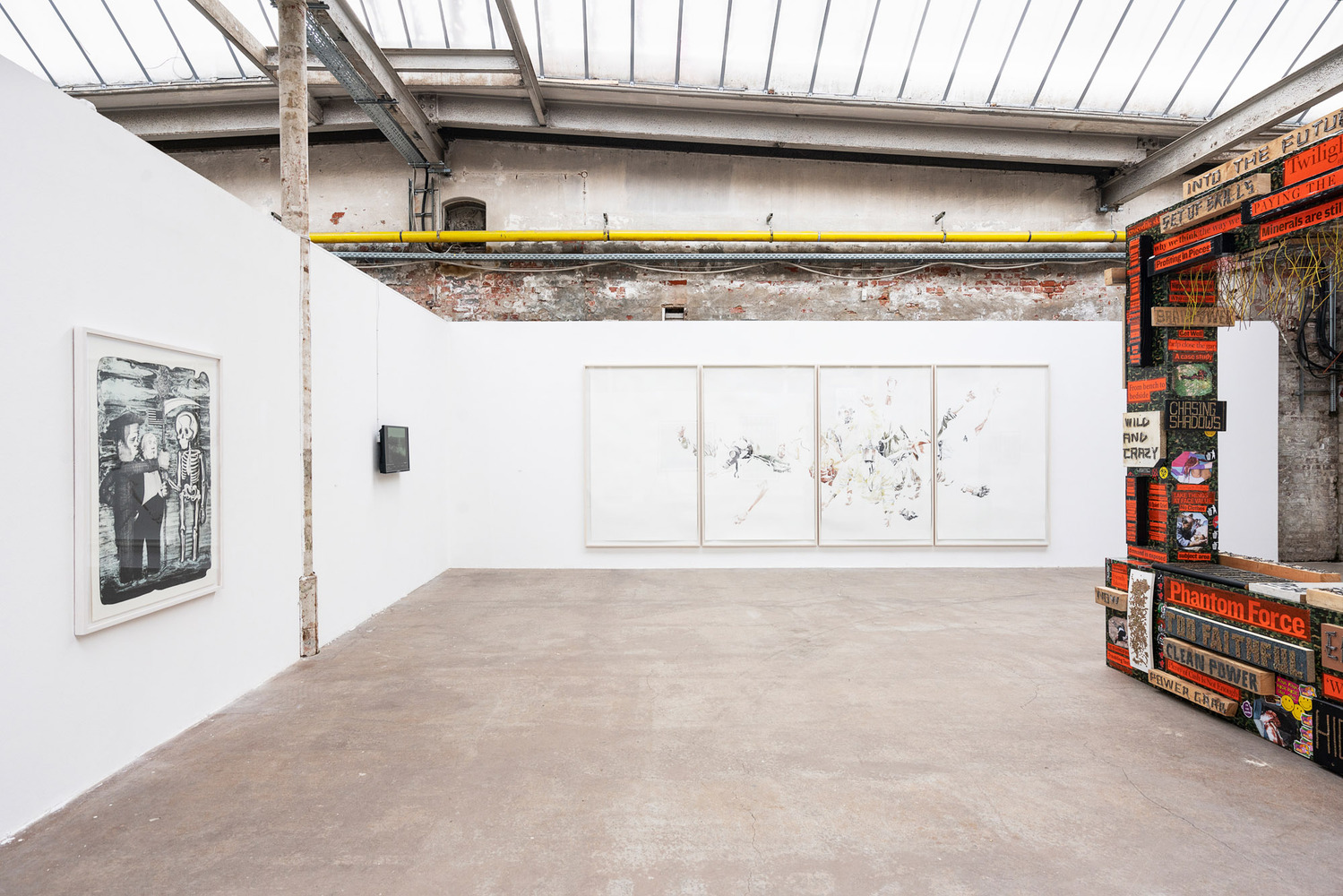 Works by Nicole Eisenman, Achim Riethmann and Thomas Hirschhorn.
The approximately 40 positions being presented come from the private collection of Rhineland real estate entrepreneur Florian Peters-Messer. These more than 350 works by international contemporary artists have come into the collection since the 1990s and this is the first time that they are being exhibited in such a scope. The exhibition is divided into thematic areas that stand for the different artistic debates of our present time, at the same time reflecting some of the fundamental interests upon which the Peters-Messer Collection focuses. 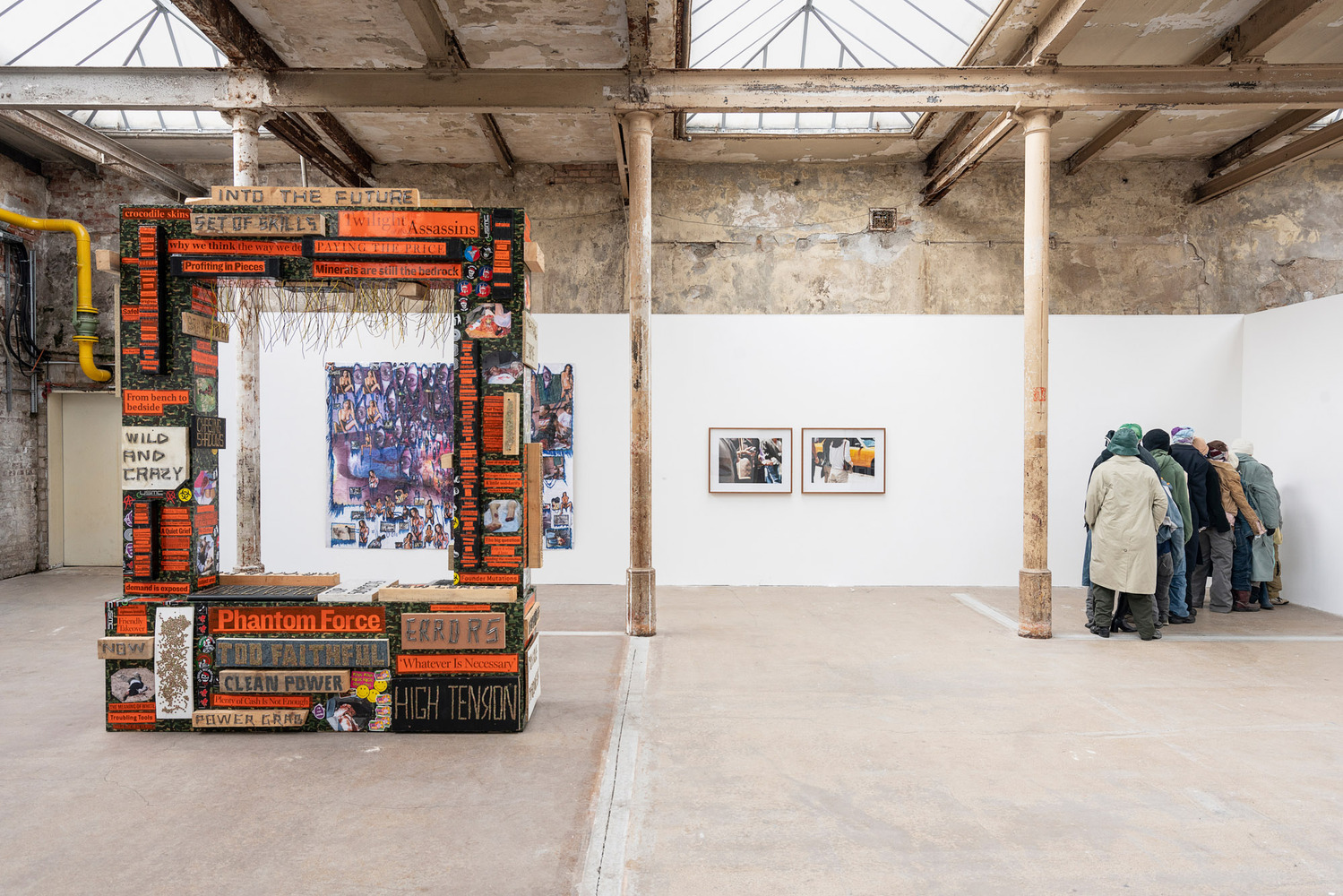 Works by Thomas Hirschhorn, Viktoria Binschtok and Iris Kettner.
In the large hall, the visitor’s eye is drawn to a spectrum of artistic positions that examine their immediate habitat taking a mostly sociological approach. The photographs of Sabine HORNIG and Paul HUTCHINSON, for example, present interpretations of modern architecture and contemporary urban life. The Swiss-Argentinian artist Vivian SUTER comments on both her outer and inner environment by translating the natural phenomena of her home country Guatemala into abstract paintings. The relationship between art and the space around it is shown by Thomas RENTMEISTER’s monumental cuboid made of paper handkerchiefs. In this work he appeals to our collective memories of childhood, invokes the sculptural and art history vocabulary of the modern age, referring to its utopias and its failure – and implicitly criticizes the throwaway mentality of our consumer society using ironic aesthetics. The works of Stefan WISSEL function in a similarly tongue-in-cheek manner. Using colors, forms and materials, the Düsseldorf artist plays an enigmatic game full of humor to shed a new and different light on the design and function of everyday objects. 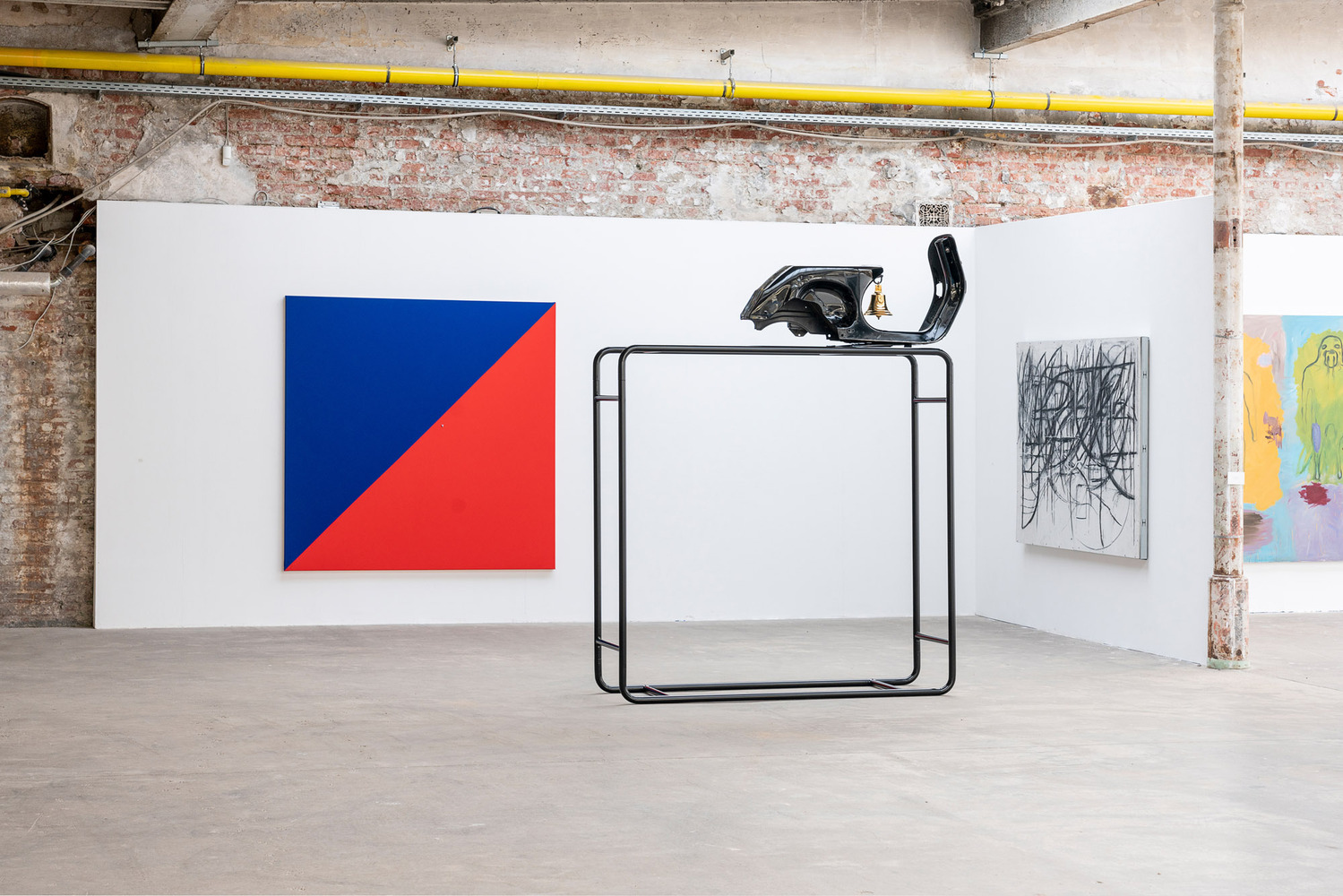 Works by Stefan Wissel and Peppi Bottrop.
The works with a great psychological impact in the Peters-Messer Collection include those by Douglas KOLK, Ville KYLÄTASKU, Bjarne MELGAARD, Konrad MÜHE or Gregor SCHNEIDER. They place at their forefront the individual and his or her most intimate fantasies and fears. With unsettling directness or manically expressive gestures, the artists each produce their own neurotically charged cosmos. Allusions to esoteric sexual practices like those in Gregor Schneider’s Man with Cock (2004) or the obsessive handling of female sexuality in Ville Kylätaskus’ painting Meeting with Freud II (2016) are examples of this. The latter’s works represent in exemplary fashion an exploration – sometimes linked to suffering – of humans and their own existence, but also refer at all times to a broken society that fades out or marginalizes what it does not understand or does not consider to be the norm. 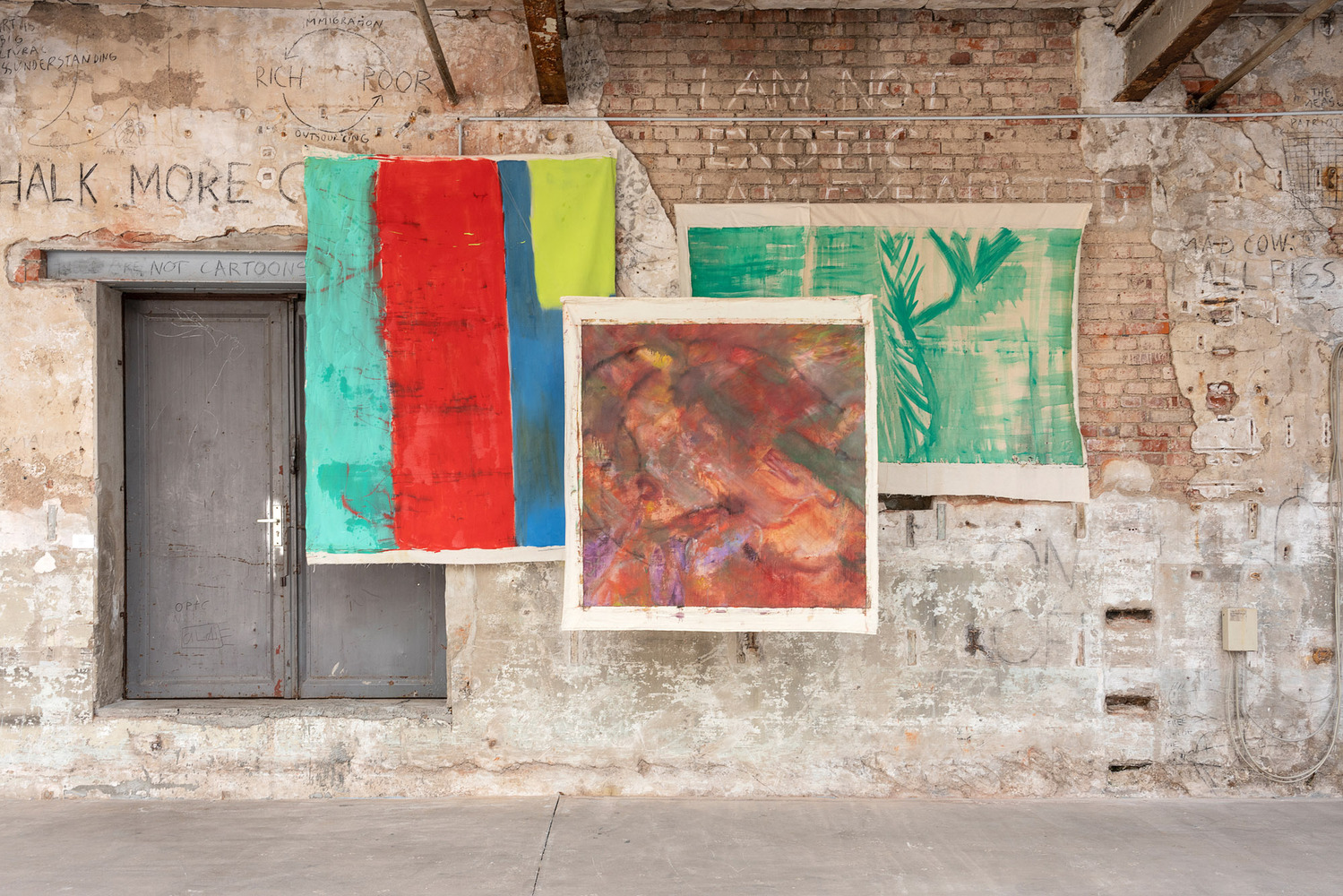 Vivian Suter "Untitled", 2017.
A selection of political works, on the other hand, looks at social grievances in an unequivocal and often formally drastic manner. The figures of Iris KETTNER made of rags and packaging material, for example, appear in their needy and fragile materiality to draw our attention to precarious life circumstances. Similarly brutal materials can also be found in the work of Thomas HIRSCHHORN, whose wooden installation is full of hackneyed buzzwords and disturbing photos and is a bizarre monument that apparently aims to counteract the trivialization of war. Yvon CHABROWSKI and Nicolás RUPCICH use the effectiveness of face-recognition programs in their performative video work FACES (2018) to ask questions about surveillance mechanisms and the way people narcissistically present themselves in the digital media era. In the works of Viktoria BINTSCHTOK, Julian RÖDER and Santiago SIERRA, photography is used as a medium to render visible the world we live in and can also be understood as criticism of capitalism. The video work Demolition Flats (2014) by Peggy BUTH shows social disadvantage in a similar way. Taking Paris’ banlieues as an example, the artist reports in her video about urban utopias and economic interests, about failed integration, social exclusion, about hope, but also about discrimination and defamation. 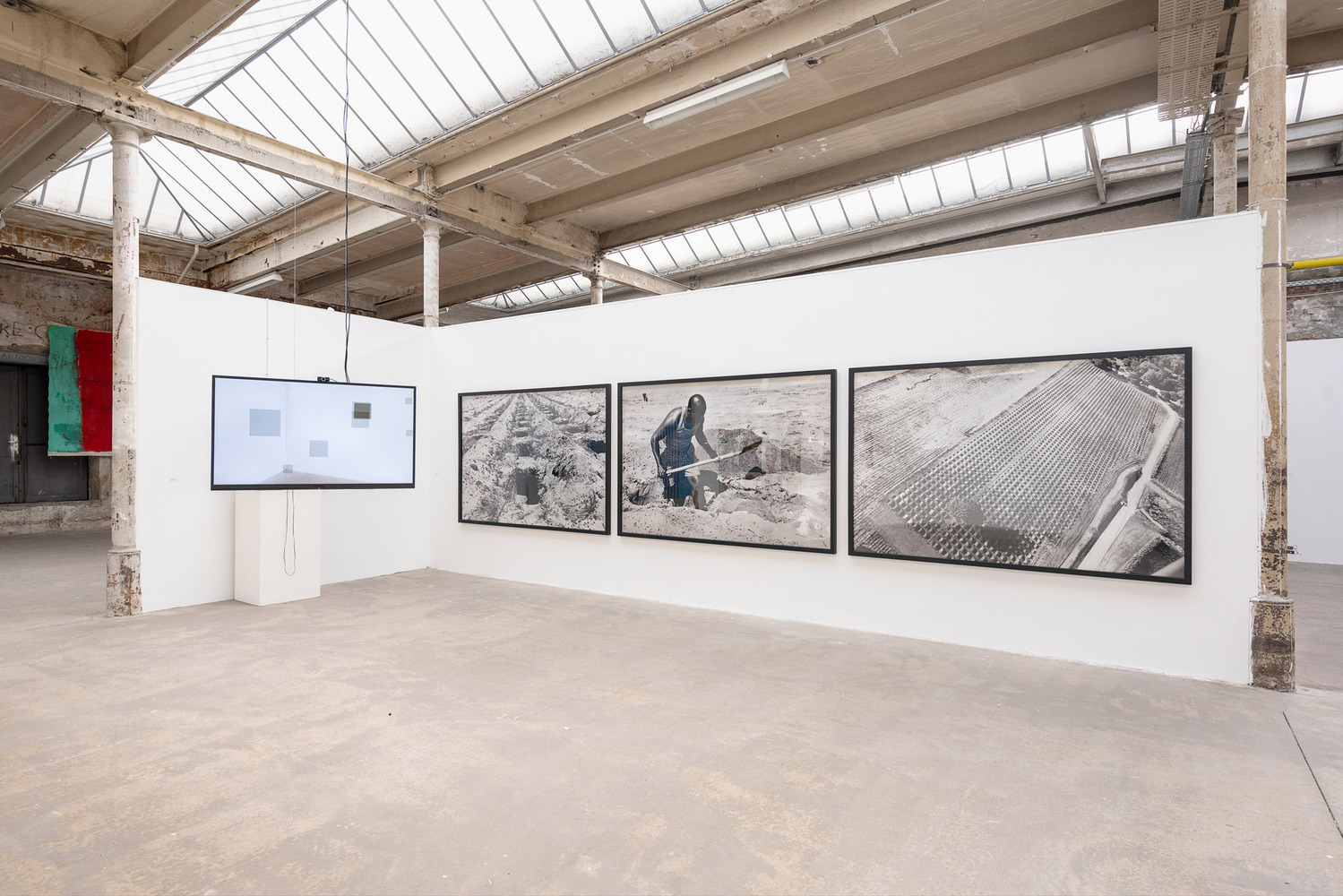 Yvon Chabrowski / Nicholas Rupcich "Faces", 2018 (left); Santiago Sierra "3000 Huecos", 2002.
An astonishing number of positions in the Peters-Messer Collection focus in their works on different forms of body images in our society. Among these are the works of Rebekka BENZENBERG, Sophie CALLE or Mélanie MATRANGA, who take a feminist approach in their mostly distorted images of femininity, as well as the works of Stefanie GUTHEIL, Alexander KLAUBERT and Jürgen KLAUKE, at the heart of which lies the issue of conventional gender images or an examination of sexual identity. How ephemeral living organisms are seems to be the message being conveyed by an over-dimensional mobile made of mummified rats by artist Gereon KREBBER. In his art, the sculptor makes use of the ambivalent and the organic being ravaged by time to provocatively exemplify processes of disintegration and destruction. With their highly glossy visual look, the works of Miriam JONAS and Oskar SCHMIDT allude to the sometimes absurd possibilities that the human body has at its disposal in the 21st century for the purposes of optimizing itself. 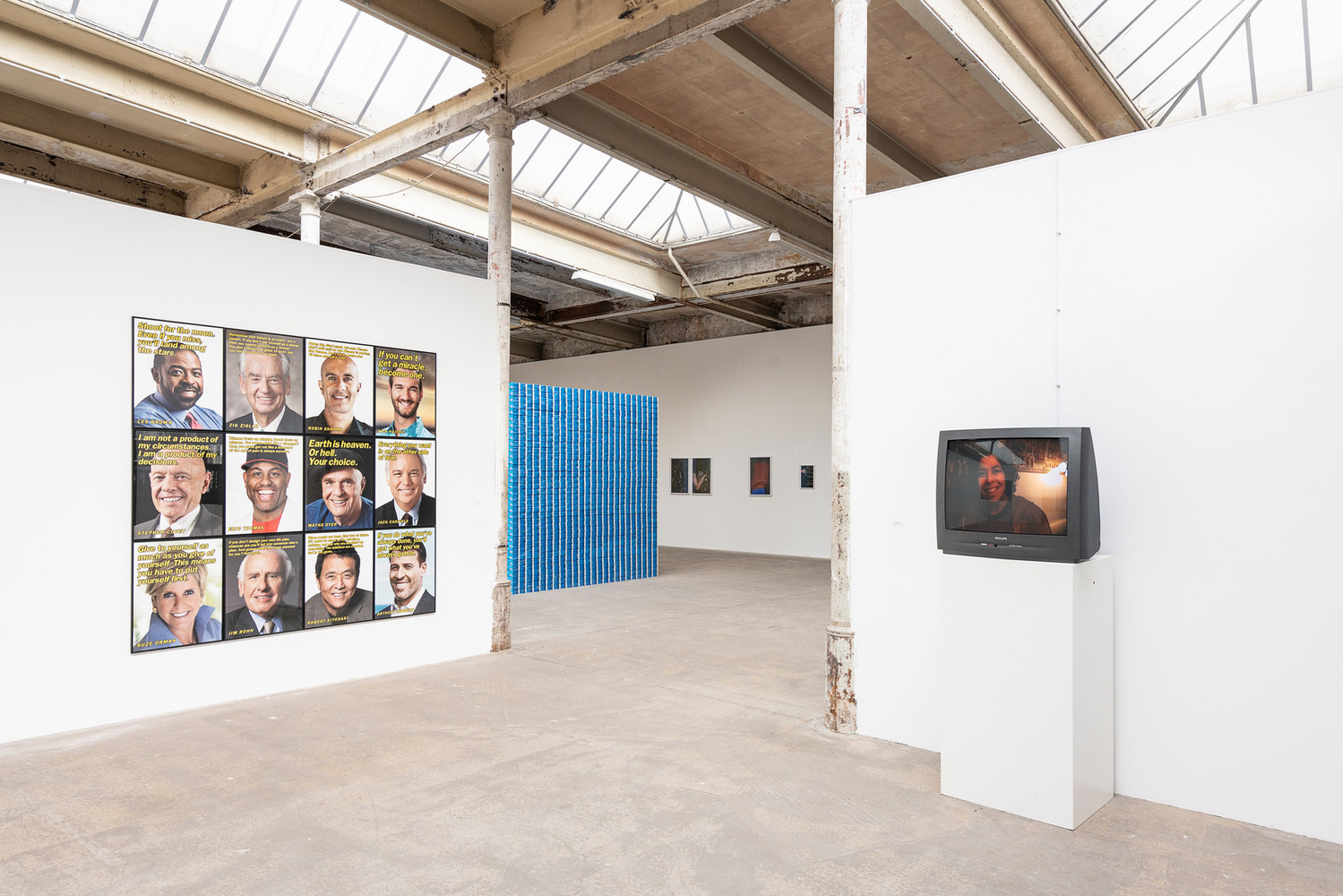 Works by Sven Johne, Thomas Rentmeister, Paul Hutchinson and Jaishri Abichandani.
A formal focus has emerged from several of the young positions which manifests itself in a very direct and lighthearted, almost childishly naïve and often exuberant aesthetic. This kind of carefree directness can be found in Nadira HUSAIN’s richly referential world of images, in the energy-laden abstract drawings of David MOSES, in the infantile-seeming paintings by Jan ZÖLLER or in the playful sculptures by Okka-Esther HUNGERBÜHLER. The apparently naïve attitude of the artists is at all times intelligently packaged, thus demonstrating how very well-informed they are. They deconstruct the conventions that other generations developed before them and arrive at their very own, contemporary expression. Henning STRASSBURGER, for example, questions in his aesthetically overloaded Hotel Paintings (2013) his own position as an artist in an era dominated by the image worlds of the mass media. Fabian MARTI, on the other hand, presents in his photographs with their naive scribblings the notion of returning to primitive culture alongside an exploration of modern artistic formats. 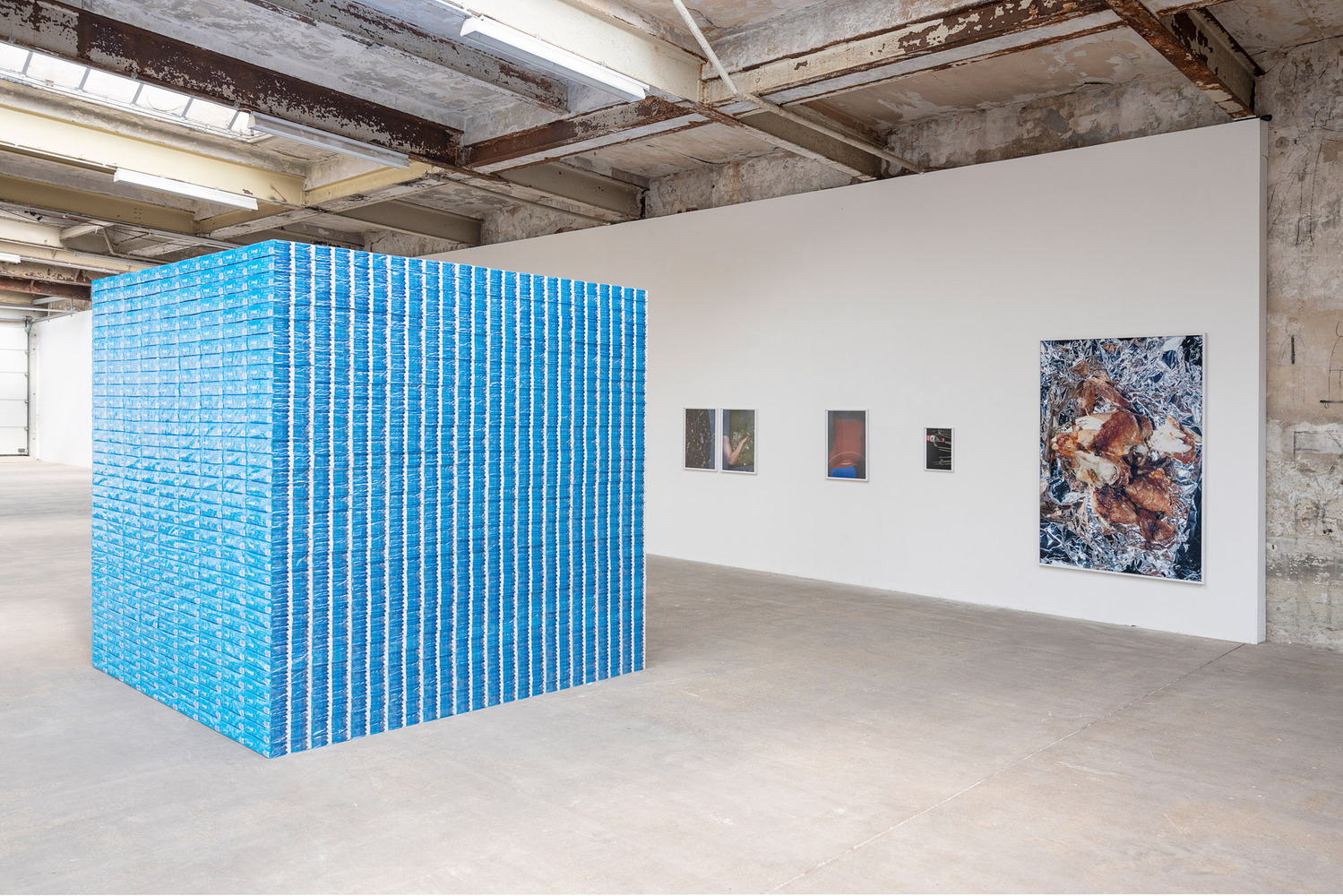 Works Thomas Rentmeister and Paul Hutchinson.
The selection of the works clearly shows that the Peters-Messer Collection is distinguished by its impressive combination of established works from the contemporary art world and works by a still very young, up-and-coming generation of artists. On top of that, the Collection’s presentation is marked by an astoundingly analog and profound underlying atmosphere despite its thematic and cross-media diversity. This is down, not least, to Florian Peters-Messer’s determined passion for collecting, which has focused from the outset on an interrelationship between art and society that sets the bar high in terms of content. 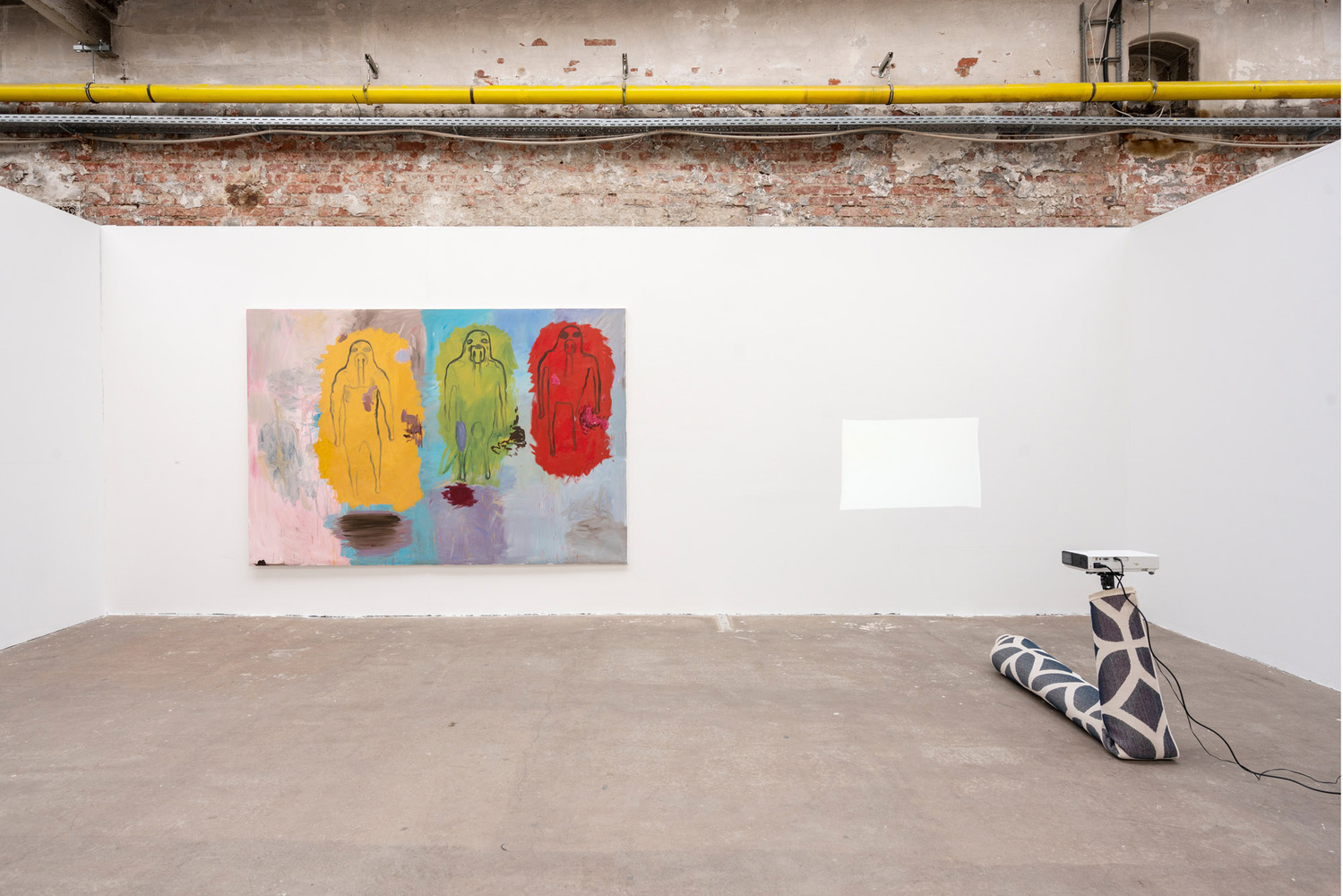 Bjarne Meldgaard "Untitled", 2006 (left); Konrad Muehe "Jona", 2017.
Looking at the art as we encounter it here is, of course, only one of many ways of seeing the world. In this sense, as an exhibition You are here does not provide us with a way out. On the contrary, it aims to focus the way we see the reality around us and bring the onlooker to position him- or herself in relation to the questions that are thrown out there by the works. The positions shown have in common their exploration of topics that have to do with every one of us. And they do this without explanatory interpretations or accusations designed to expose. Instead, they explore in a way that generates knowledge, establishes interconnections and poses critical questions. They proceed from sociological issues, historical and personal occurrences or formal and aesthetic approaches. In an individual manner, the artists investigate their own bodies, their family history and sexuality, or take a closer look at the mechanisms of surveillance, power and repression. 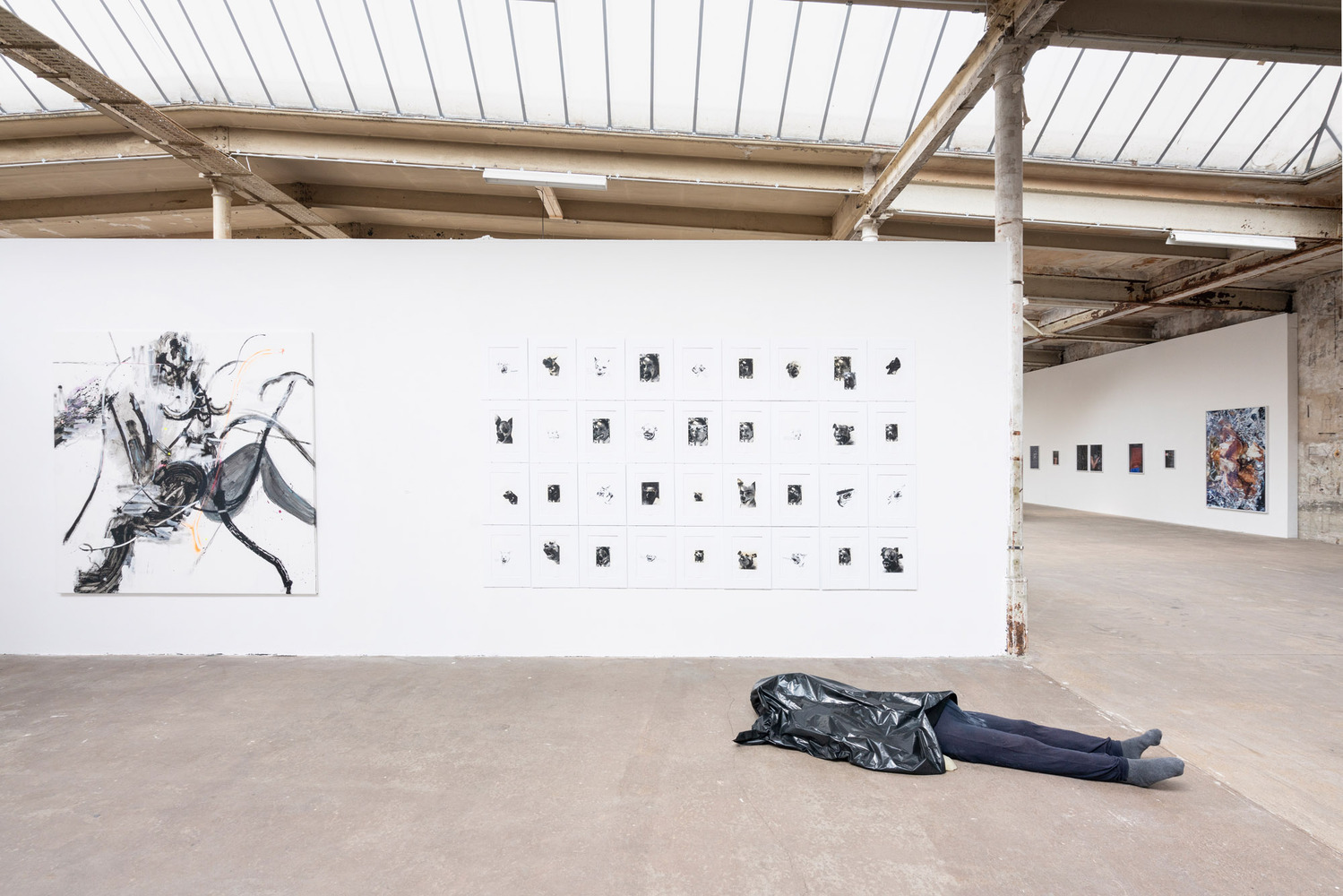 Works by Villa Kylaetasku, Douglas Kolk and Gregor Schneider.
The exhibition is curated by Linda Peitz and was made possible thanks to the support of the SpinnereiGalerien. It is also showing some works on loan from the Miettinen Collection Helsinki/Berlin. 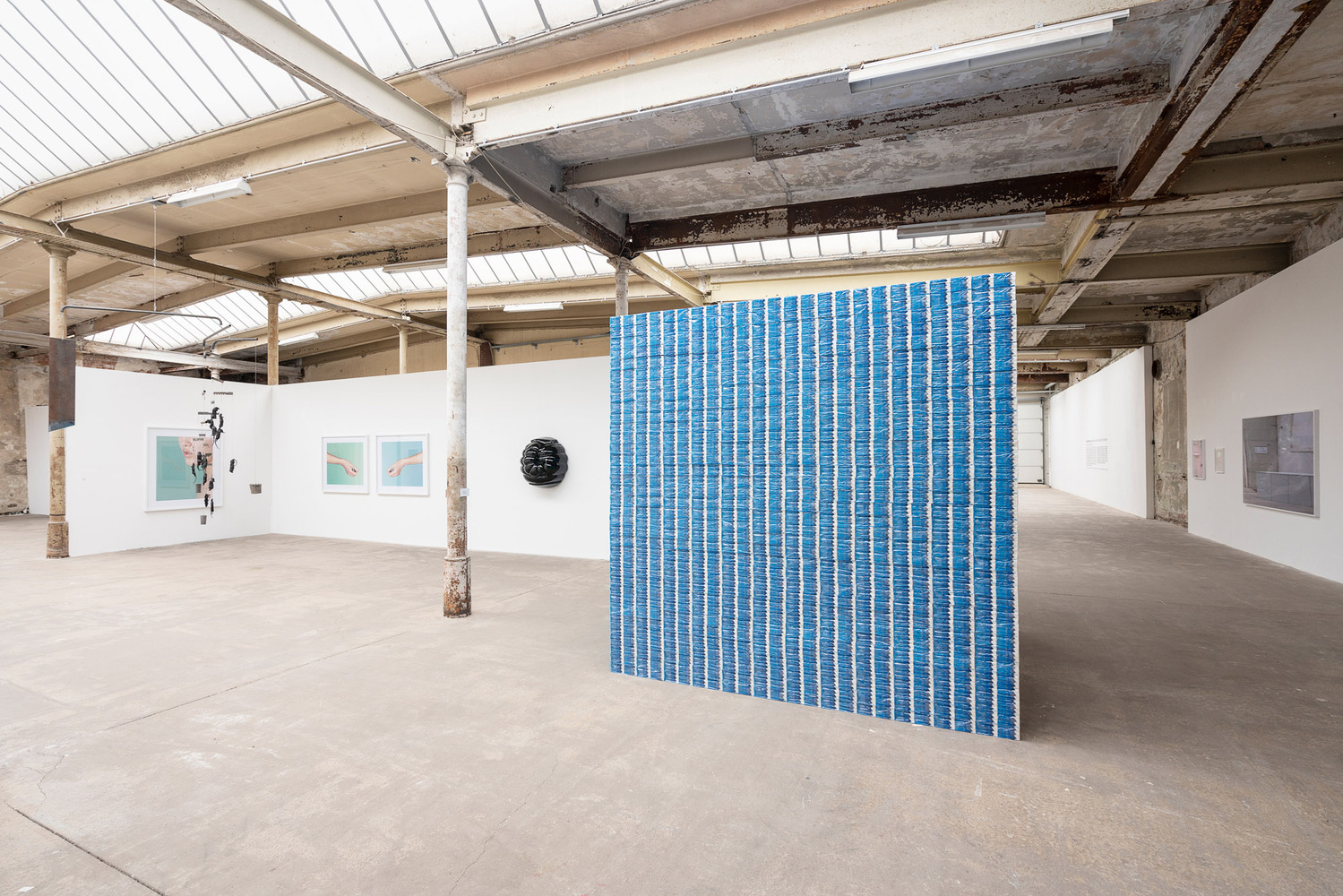 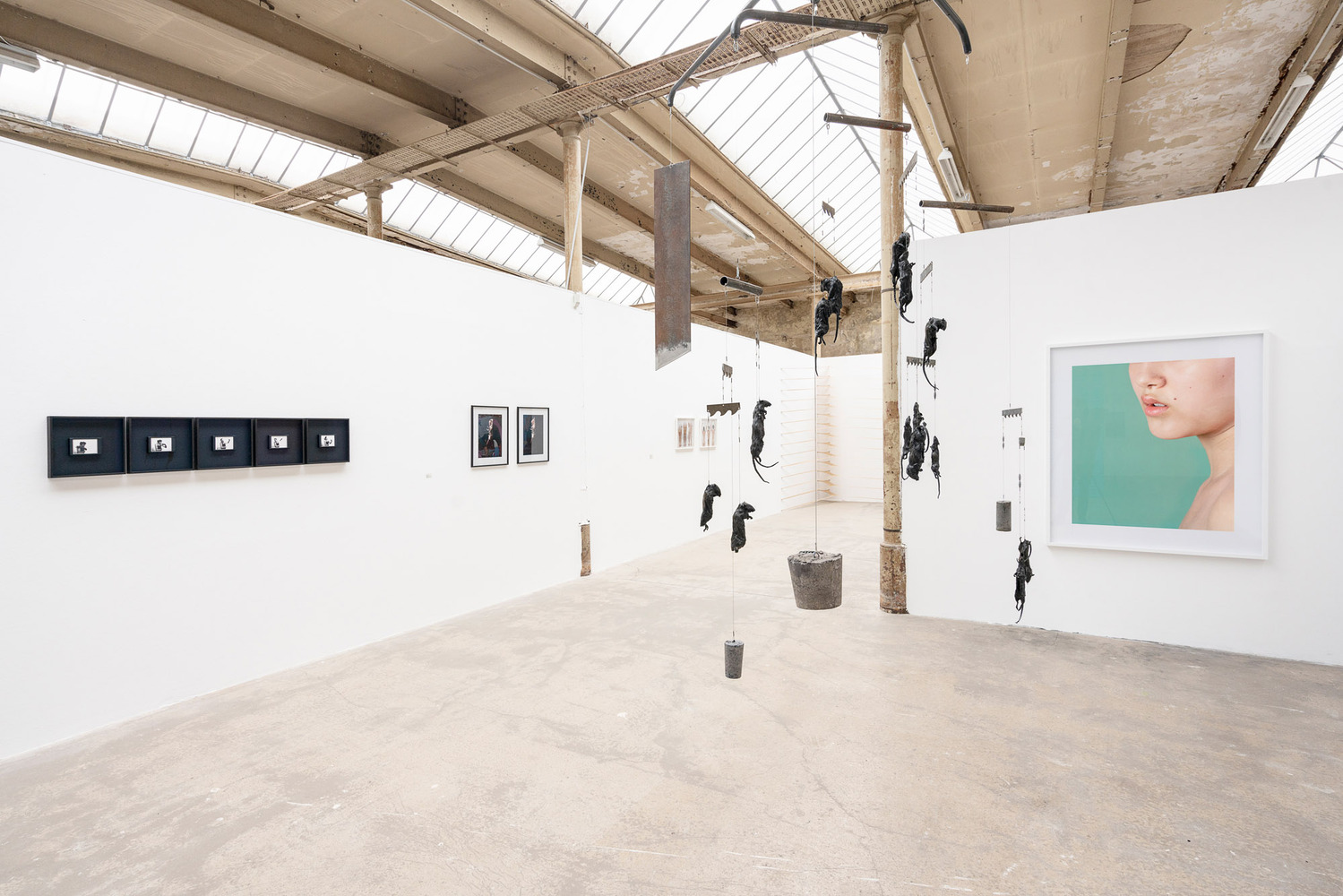 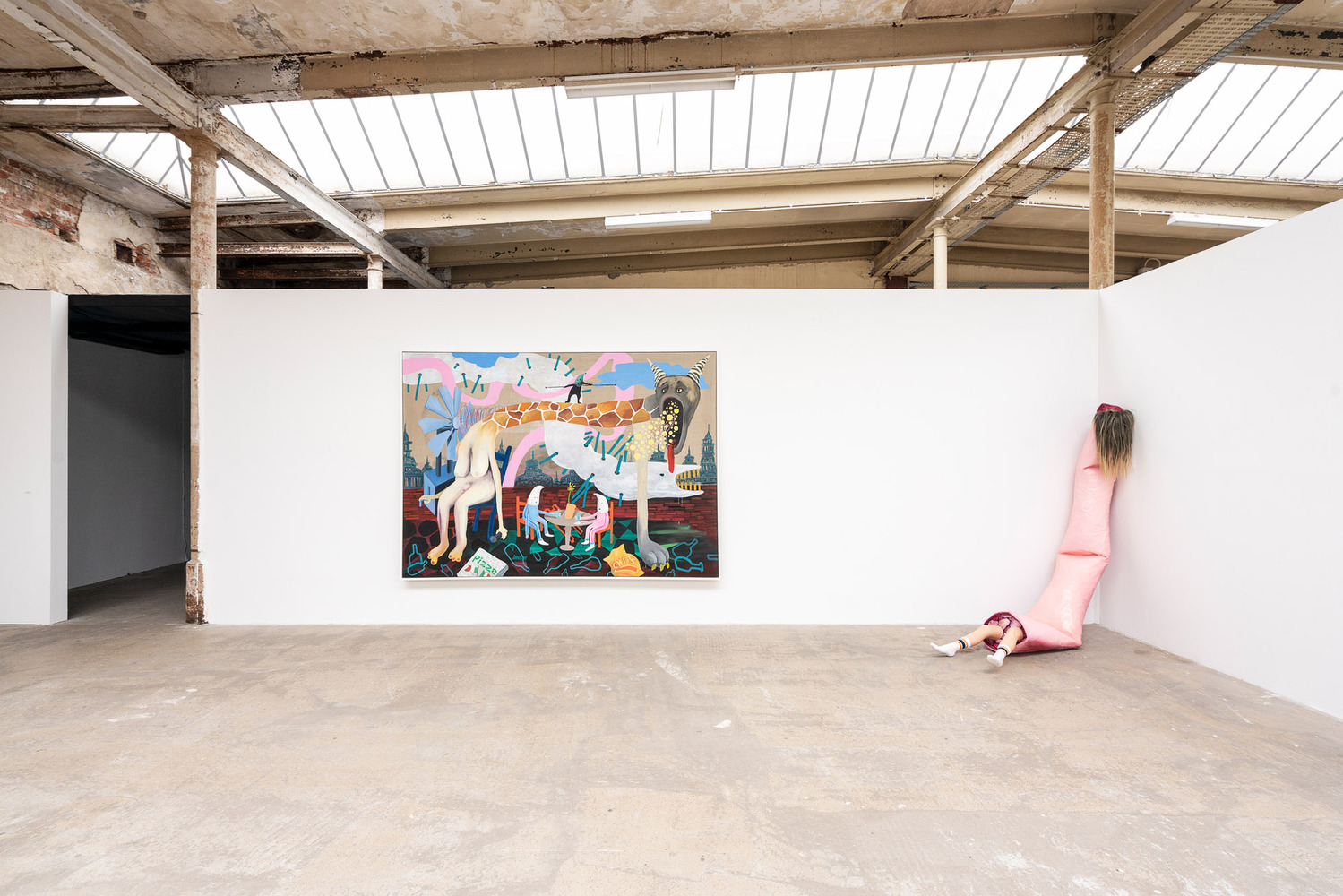 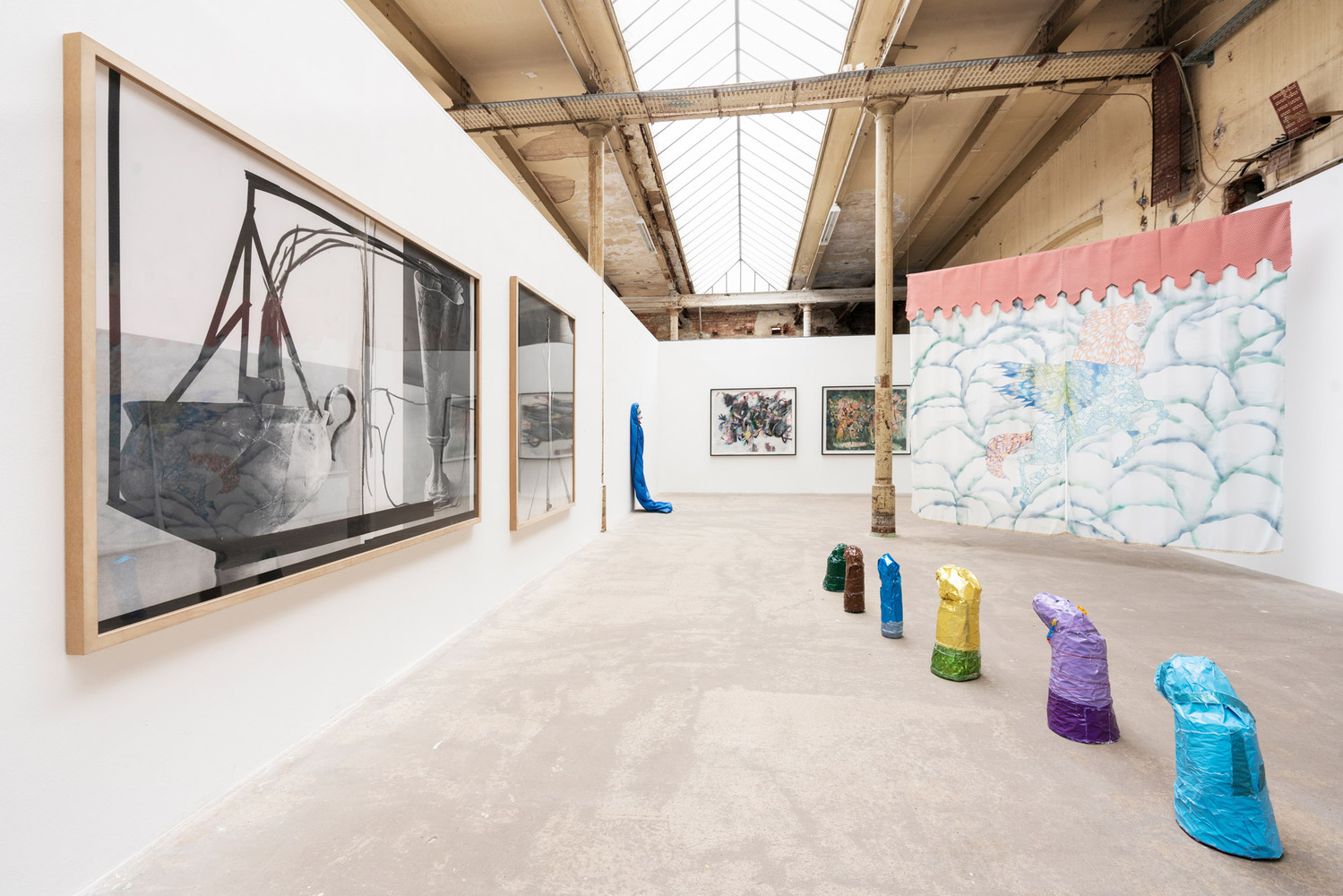 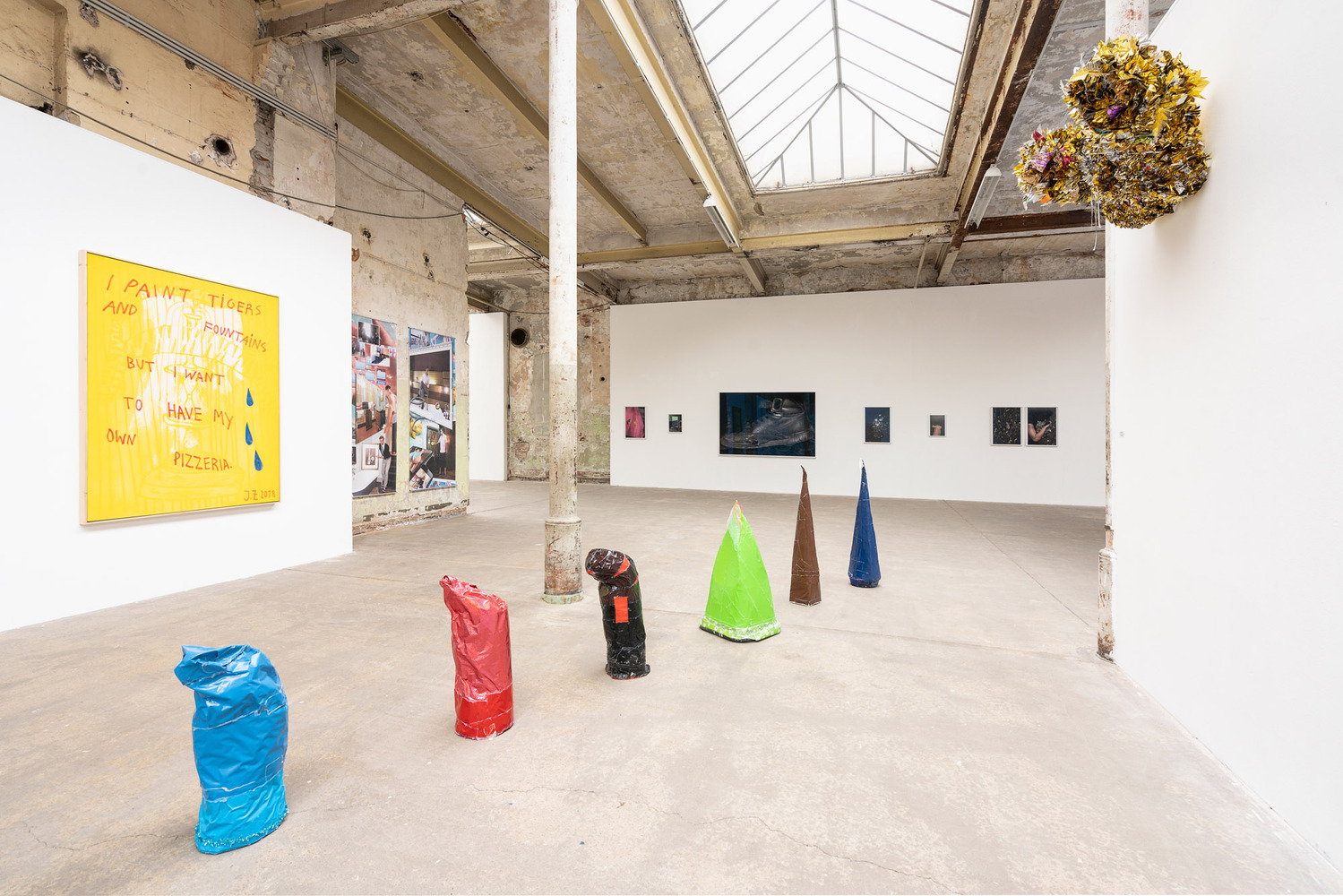 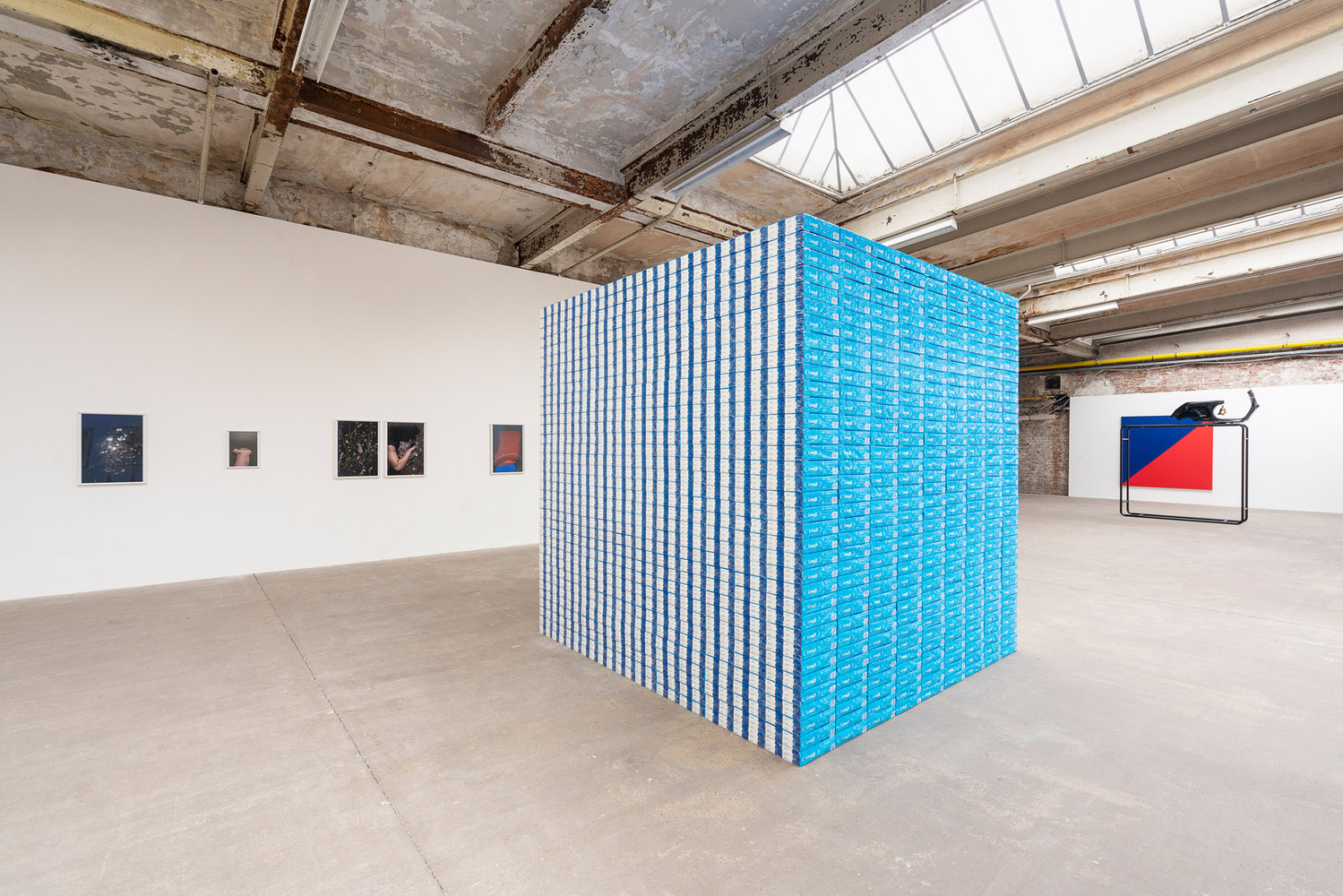 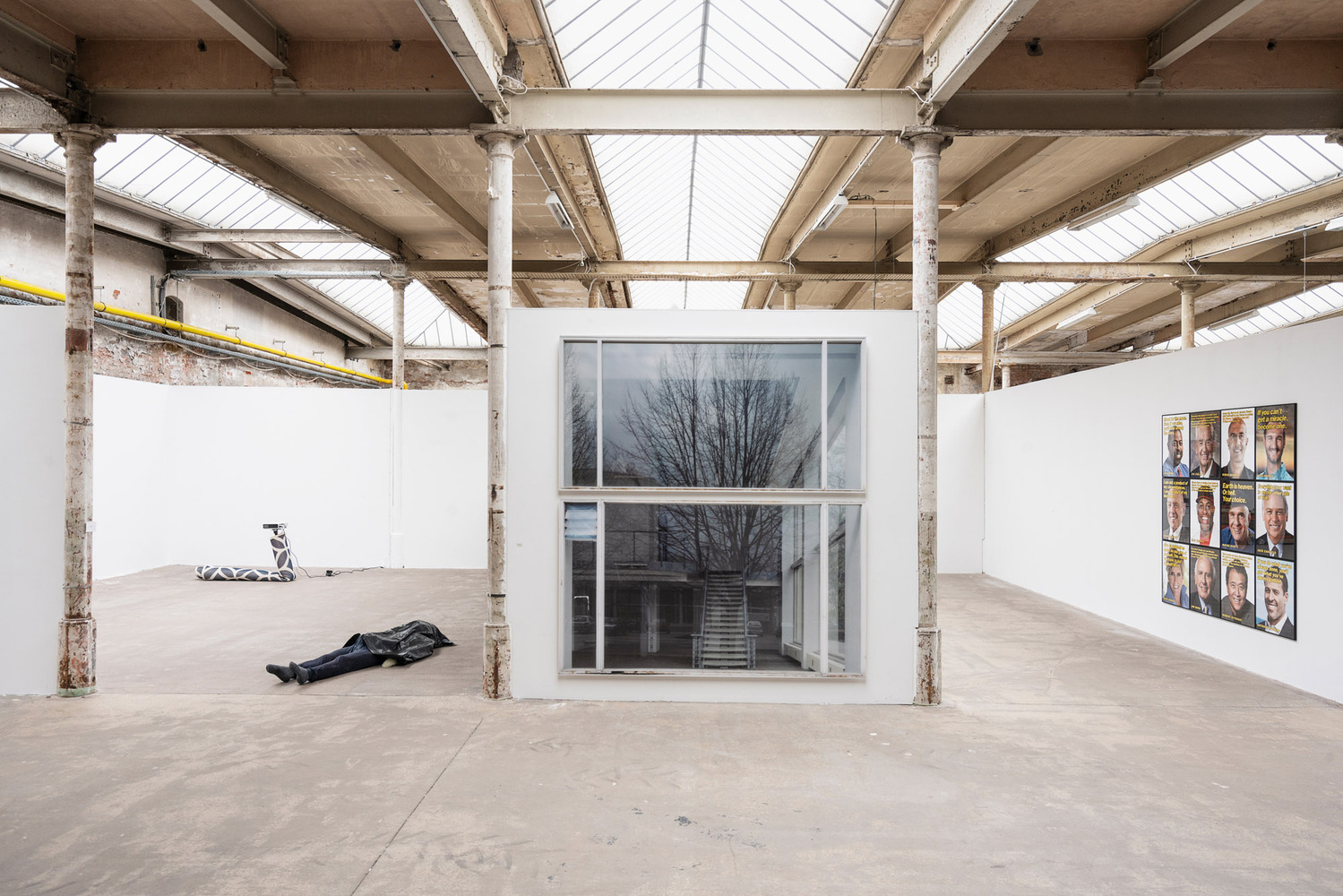 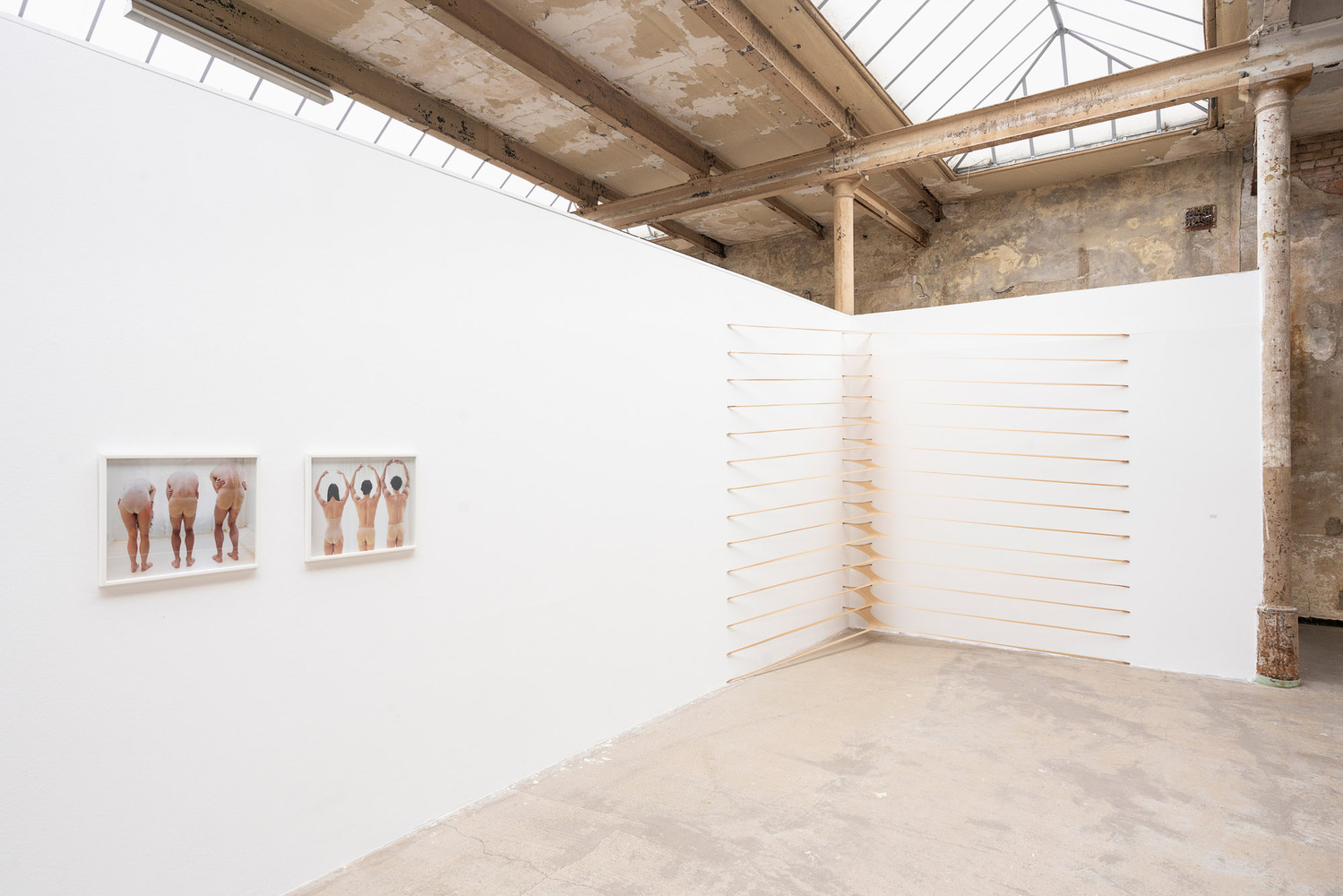 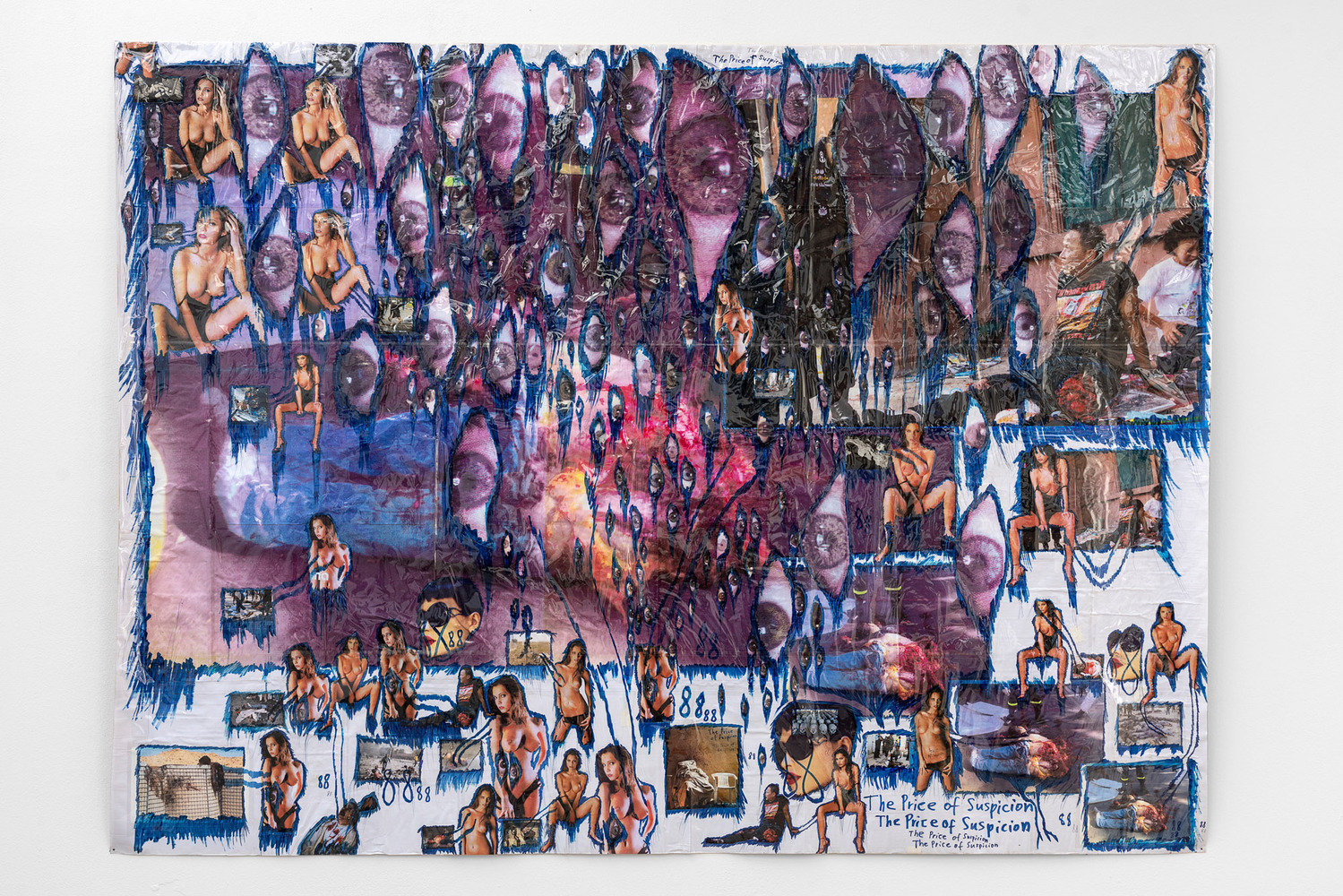 Thomas Hirschhorn "The price of suspicion", 2009 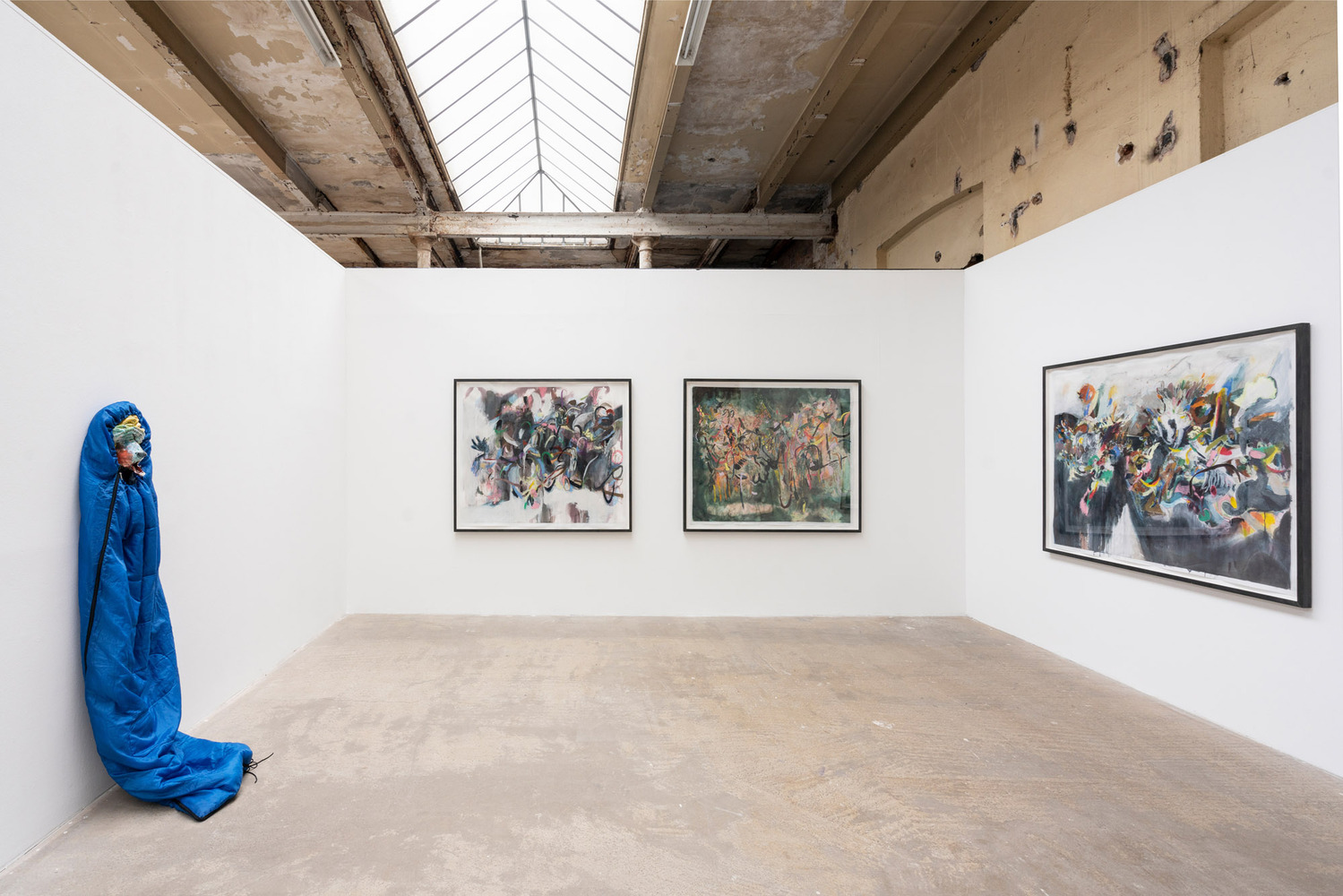